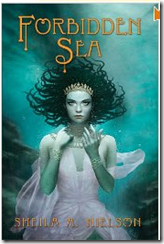 My sister, Sheila A. Nielson, recently published her first YA Fantasy book: Forbidden Sea. (See also her book blog found here.) I wanted to bring it to the attention of the Mormon Blog audience. I think it would have a strong appeal to all religious people.

It’s the story of young teen named Adrianne Keynnman of Windwaithe Island and her many life struggles. When she was young, Adrianne lost her father to a horse riding accident and since then her family has struggled to just survive. Her comfortable life disappeared before her eyes and now she and her family are so poor they can’t even afford to pay to feed their beloved dog.

To make matters worse, Adrianne, not quite in the bloom of womanhood yet, finds herself being picked on by the cruel boys of the island and looked down upon by the richer (and prettier) girls. But even through all this, Adrianne begins to realize that things could be worse and some are even worse off than her.

Even as a guy I found I could relate to Adrianne’s struggles. Who hasn’t had to face just how tough life can be? And who hasn’t feared becoming the social outcast of their peer group?

And then one day Adrianne’s sister, Cecily, runs away. When she finds and rescues Cecily, to  Adrianne’s shock a mermaid tries to catch her and drown her in the sea. As if life wasn’t bad enough already.

But sometimes the trials of life are not what they appear to be.

The book touches upon some deep themes about the true meaning of life and what it means to have joy.

Fantasy lovers will particularly enjoy this book, though I believe it will appeal to a mainstream audience as well because the Fantasy elements are so deeply woven into the real life dramas of the heroine.