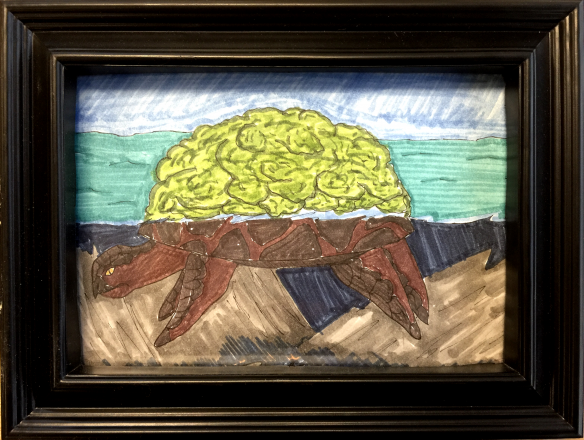 My first encounter with Fastitocalon was through J.R.R. Tolkien’s delightful poem of the same name in “The Adventures of Tom Bombadil“:

I love Tolkien’s warning to “Pay heed to sailors’ ancient lore, Set foot on no uncharted shore!” I also love his description of the deceptive gulls, who “strut and prink,” and “tip the wink.”

Of course, much of Tolkien’s work involved drawing upon and re-imagining existing mythological and linguistic ideas. But it wasn’t until I studied Old English myself in college that I became aware that this poem from Tolkien was adapted from a very famous Old English poem entitled The Whale, composed by an Anglo-Saxon author in the late 900s AD. In the poem, the sea monster was conceived of as a whale rather than a turtle. 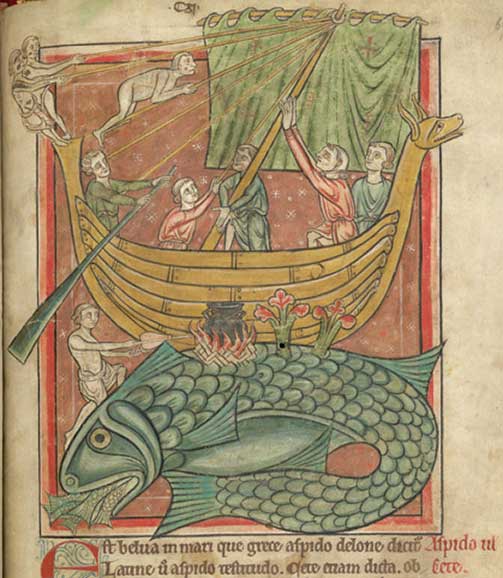 Here is the relevant excerpt in Old English with a Modern English translation from Rutgers University’s Anglo Saxon Poetry site:

The author of The Whale himself adapted the concept from Physiologus, which was one of the most widely-read and translated medieval bestiaries. It was written in Greek some time in the 2nd century AD. The Old English name Fastitocalon was adapted from the Greek name Aspidochelone (“asp-turtle” or “shield-turtle“).

As was common with medieval bestiaries, the animals described (both strange and common) included an attached moral or allegorical meaning. Often the accuracy of the descriptions of the beasts themselves was readily sacrificed in favor of the efficacy of the allegory. Some of these allegorical attributes associated with certain animals have survived subliminally into our modern literature. The Physiologus text makes Aspidochelone a name for the Devil, and in his poetic expansion, the author of The Whale extends the allegory in great detail, explaining how Fastitocalon represents the Devil and his wiles.

Centuries later, in Paradise Lost, John Milton adapted the Fastitocalon story to the Old Testament image of the Leviathan, which he explicitly used in comparison to Satan:

The concept of the sea monster that pretends to be an island in order to drown seamen appears to be a commonly repeated archetype throughout many ancient languages, cultures, and traveler’s legends, including Egyptian, Greek, Hebrew, Persia, Arabia, and even the Inuit of Greenland.

The literary image of the whale has endured in stories like Pinocchio‘s Monstro. In some interpretations of Moby Dick, Herman Melville reversed the archetype by making the whale white and a symbol for God, and captain Ahab the defiant and unyielding Satan. Even the modern television show Doctor Who manages to draw upon the ancient imagery with a novel twist on the archetype in an episode titled “The Beast Below”. (Doctor Who Season 5 Episode 2)

This kind of archetypal imagery still has a lot of application to everyday life. I keep my daughter’s drawing on my desk at work to remind myself not to be too confident of appealing perceptions; to be wary of the uncharted and unknown; and to look below the surface.

There are also some helpful applications to the LDS Church and some of the controversies among its members in recent months and years.

Brigham Young, the second prophet of the Church of Jesus Christ of Latter-day Saints, used to compare the church to a sailing ship he called “The Old Ship Zion.”

In the October 2014 General Conference of the Church, in a sermon titled “Stay in the Boat and Hold On,” Elder M. Russel Ballard of the Twelve Apostles reintroduced the members of the church to President Young’s analogy of the Old Ship Zion:

“President Young said that he also worried about people losing their way when they were being blessed—when life was good: ‘It is in calm weather, when the old ship of Zion is sailing with a gentle breeze, [and] when all is quiet on deck, that some of the brethren want to go out in the whaling boats to have … a swim, and some get drowned, others drifted away, and others again get back to the ship. Let us stick to the old ship and she will carry us [safely] into the harbor; you need not be concerned.’ ”

Then one year later in the General Conference of October 2015, Elder Ballard returned again to the same theme in a sermon titled “God is at the Helm“:

“In last October’s general conference, I invited listeners to follow Brigham Young’s counsel to stay on the Old Ship Zion, which is The Church of Jesus Christ of Latter-day Saints, and to hold on with both hands.

Now, as we ponder just these few truths that exist within the Old Ship Zion, let us stay on board and remember that, by definition, a ship is a vehicle, and the purpose of a vehicle is to take us to a destination.

Our ship’s destination is the full blessings of the gospel, the kingdom of heaven, the celestial glory, and the presence of God!

God’s plan is in place. He is at the helm, and His great and powerful ship flows toward salvation and exaltation. Remember that we cannot get there by jumping out of the boat and trying to swim there by ourselves.“

The maritime imagery might be easily extended to include a warning about Fastitocalon.

The point of Fastitocalon‘s deception is that he waits. Until the moment of disaster when he dives, everything seems fine. Warnings from old sailors who know the lore appear foolish and misguided, or even appear to be wicked attempts to deny people pleasure and relief from the hard voyage.

As I have often mentioned before, the consequences of decisions are often not immediate. Cause and effect are not always proportional or linear. Left to our own intelligence, we simply cannot successfully evaluate the long-term consequences of our decisions.

To complicate the issue, our fallen world is full of deceptions. Apparently safe, welcoming uncharted islands can turn out to be inconceivable, monstrous traps. When we’re tired of the Old Ship, and the voyage is exhausting, and we’re suffering, it is understandably tempting to want to get off and take a rest.

But beware of Fastitocalon, the Beast Below, who gives the illusion of intellectual,  spiritual, and emotional strength and stability for a season, biding his time until he can cause the most damage and drown everyone.

He would love to get the Old Ship Zion to attach her moorings to his gigantic shell.

That is why we need to have faith that the Lord is guiding His Old Ship Zion through his prophets. We need to heed and trust their guidance, even when it doesn’t make sense to us, and the uncharted island beckons with the promise of solid land. And it is why we need the Holy Ghost to help us make correct decisions even when we cannot ever have enough information about the long-term ramifications and are blind of the deceits being practiced upon us. 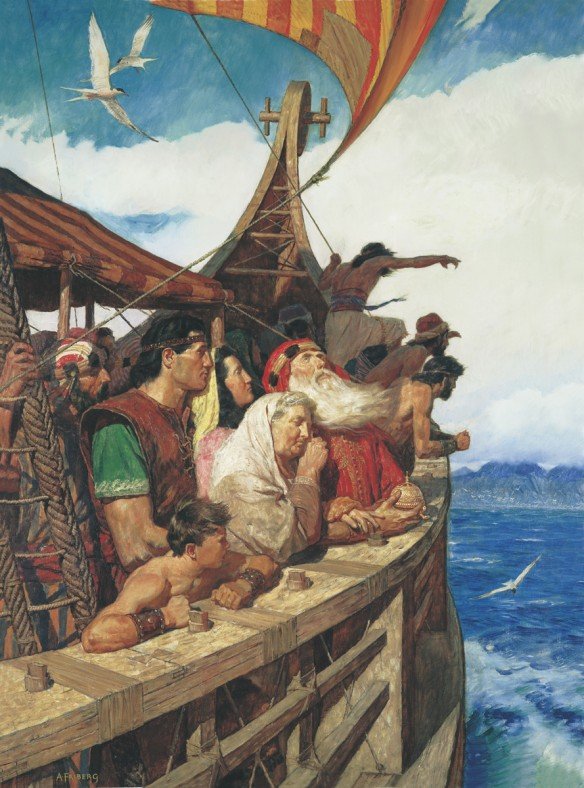