Skip to primary content
And Jesus answering said, A certain man went down from Jerusalem to Jericho, and fell among thieves, which stripped him of his raiment, and wounded him, and departed, leaving him half dead.
And by chance there came down a certain priest that way: and when he saw him, he passed by on the other side.
And likewise a Levite, when he was at the place, came and looked on him, and passed by on the other side.
But a certain Samaritan, as he journeyed, came where he was: and when he saw him, he had compassion on him,
And went to him, and bound up his wounds, pouring in oil and wine, and set him on his own beast, and brought him to an inn, and took care of him.
And on the morrow when he departed, he took out two pence, and gave them to the host, and said unto him, Take care of him; and whatsoever thou spendest more, when I come again, I will repay thee.
Which now of these three, thinkest thou, was neighbour unto him that fell among the thieves?
And he said, He that shewed mercy on him. Then said Jesus unto him, Go, and do thou likewise.  Luke 10:30-37 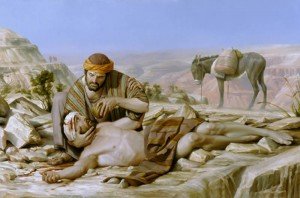 On an seemingly  ordinary Veterans Day six years ago, the most notable aspect of the day was the miserable weather. The  usually gentle southern breezes of Middle Tennessee  were replaced by a fierce Canadian wind biting and  gnawing at the very bones of anyone, who ventured out for a quick run to the car.  It was late afternoon, and my husband Mike left the office for home.  Preoccupied with the daily grind, the last thing Mike expected, was he was about to become a “Good Samaritan” and  care for one who was unfortunate to have “fallen among thieves”.

Mike had a business meeting scheduled  early the next morning in Chattanooga, Tennessee, a city two hours south of us, by way of the I-65 and I-24 thru the hills and mountain pass leading to the Tennessee-Alabama-Georgia border. Leaving work early, he stopped at home to retrieve his overnight suitcase and computer bag, Mike was preoccupied with stress.  The past few months had been unusually difficult. It seemed to him, he had been abandoned by even God.

Caught up in obsessing about the meeting the next morning, and also because of his absent-minded nature, Mike inadvertently left his computer bag sitting against the stairs near the front door. Was it a coincidence, dear reader, or  a divine “stupor of thought” forgetting the bag?  I, naturally,  prefer the influence of the divine to mundane coincidence.  He got in his big red pick-up driving south on the I-65 at the entrance ramp just outside our neighborhood. Fortunately ( or perhaps divinely), Mike realized, shortly after entering the freeway, the forgotten computer bag and promptly got off at the next exit, doubling back to retrieve it.

Leaving perhaps thirty minutes later, driving the exact same route as earlier, Mike steered his pickup onto the freeway. Unlike before, the once empty on-ramp was now occupied by a  thin elderly hitchhiker bumming a ride south.  There was no internal debate on whether to stop or not. Instinctively pulling over, Mike pushed  open the  passenger door and gestured to the elderly gentleman to come on in. Gingerly the frail old man, climbed up into his pickup cab. Mike noted the man was shivering wearing only a cotton short sleeved shirt and thin slacks. Mike  handed the gentleman his leather jacket for the old man to wear and cranked up the heat.

In no time, Mike discovered his travel companion had a sharp intellect and was  an enjoyable conversationalist. Mike’s burdens became lighter by engaging conversation with the cheerful tenacious senior citizen from  sunny Florida; who had unfortunately found himself stranded and  freezing on a freeway entrance in Middle Tennessee. The elderly gentleman, who we will call Hank, for I have long forgotten his real name, was a veteran of  WWII.  As a young man, Hank had fought in the Pacific theatre and was a survivor of the Bataan Death March.  Mike had a keen interest in WWII and had recently read Ghost Soldiers: The Epic Account of World War II’s Greatest Rescue Mission.  This led to a long conversation about Hank’s survival  as a prisoner of war in the Japanese camps.

After a career in the Army, Hank married his sweetheart. Together they  became  the parents of a daughter and settled in Kentucky, with Hank employed as a fireman. Many years later, Hank’s wife passed away and he buried her in Kentucky. His daughter married a man in the service and she and her family were currently stationed in Europe.  As Hank advanced into old age, he became weary of the cold humid winters of Kentucky,  and moved to Florida to live near his old army buddies. His daughter and her family also planned to settle in Florida after retiring from the Army.

Hank felt his health deteriorating, realizing his energy for travel was slipping away;  he desired to visit his wife’s final resting place just one last time. He packed a bag, bought a heavy coat and a round-trip bus ticket from his home in Florida traveling to Kentucky. While in Kentucky, Hank enjoyed visiting with old friends and especially the grave of his beloved wife. After a few days, he  said his goodbyes and boarded the bus for  the return trip to Florida.

While waiting to transfer buses in Nashville, Tennessee,  he fell asleep, and it was then, Hank fell among thieves, who stole his suitcase, coat, money and ticket. When Hank awoke,  he found himself stranded without the means to return home.  Determined to get to Florida on his own, Hank stuck out his thumb and became a hitchhiker. A truck driver gave him a ride to our hometown and left him to freeze by the side of the freeway. That particular on-ramp is a busy one, and several cars must have sped past choosing to  ignore the plight of the unfortunate elderly man. Thirty minutes later, Mike entered the freeway. Upon inquiry, Mike discovered  Hank had not eaten in several hours; he soon enjoyed a coffee and a hot meal.  Arriving in Chattanooga, with only minutes to spare,  Mike bought Hank a bus ticket on the last bus leaving for Florida, let Hank use his cell phone to call friends, and gave him cash for the rest of the trip. Mike stayed a few extra moments while waiting for the bus to leave, as Hank waved goodbye happily wearing Mike’s beloved leather jacket.

Years later, reflecting on Hank’s series of unfortunate events which lead him to Mike, who is now a blessed memory;  serving Hank became a precious gift for Mike. The scriptures speak of  the succor the wounded man received, but to be given the blessing to be a Good Samaritan brings it’s own kind of succor as Mike’s burdens were made lighter when his soul was uplifted. Hank’s life story, plight and Mike’s help in the subsequent rescue ; reminded Mike of God’s love and  how aware He is of our circumstances. As Mike’s family we are also blessed by Hank;  for we have joy remembering the goodness of Mike. Given the advanced age and frailty of Hank six years ago,  perhaps he also is a blessed memory for his loved ones. I now like to think of  Hank and Mike together, enjoying an eternal friendship, forged on an ordinary Veterans Day during a long and enjoyable ride to Chattanooga, Tennessee.

14 thoughts on “A Tale of a Good Samaritan on the Road to Chattanooga, Tennessee”