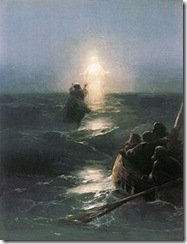 In a past post I talked about Joe Geisner’s short review (in a comment) of Heinrich Paulus’ book where he tries to come up with ways to explain way the miracles of Jesus.

All of this reminded me of a news report I once saw on the evening news. I wish I had a clip of it. I can’t even remember for sure if it was Tom Brokaw or Peter Jennings. I’m thinking it was Peter Jennings.

At best as I can remember from memory, here is what he said:

Well, we recently did two news reports that might be important for Christians. One was a news report that scholars have found the Gospel of Judas, complete with it’s very different take on the teachings of Jesus, and another was about a scholar that had discovered that sometimes the ﻿Sea of Galillee freezes, perhaps explaining how Jesus walked across it.

Given these recent news stories, we wouldn’t blame people if their faith was shaken. Good night.

I sat there stunned. Was he serious? Finding the text of a known to exist, but lost, heretical gospel – heck there were tons of these things – is supposed to somehow frighten Christians? And having some scholar point out that water freezes and you can thus walk on it is going to undermine people’s chosen faith in the miracles of Jesus? I started laughing.

I was really curious how this scholar explained the fact that Jesus walked all the way across the Sea (according to the Bible anyhow) and Peter was shocked. Heck, they thought Jesus was a ghost, didn’t they? Were the apostles maybe not aware you can walk on frozen water? Or was it maybe frozen into moving waves so that it didn’t appear frozen? (I’d like to see this scholar explain how such a thing is possible.)

So Peter asks permission to jump out of the boat and walk on water too. (Because, remember, he doesn’t know you can walk on frozen water.) And then he falls through the ice and Jesus has to catch him. (For the moment, we’ll ignore Jesus’ miraculous ability to stand on broken ice without falling in.)

You see the point. This isn’t even a semi-rational response to the story of Jesus. And you don’t even need convoluted stories like this. All you have to do is claim it didn’t happen in the first place and be done.

Yet Jennings (or whoever it was) clearly thought this was some sort of ground breaking set of revelations. I’m going to venture a guess that prior to these reports Jennings didn’t believe in Jesus anyhow. So what is it about rationally ridiculous stories like this that have such strong appeal to non-believers? Even intelligent ones like a famous news anchor? Why didn’t he see how silly he was being?

I think this example illustrates something important about human nature in general that has extra significance for Rejectionist philosophy. (i.e. Those that are focused on what they disbelieve rather than on what they believe.) At a human level, we favor narratives over non-narratives. The argument that Jesus didn’t walk on water, just ice, is a powerful psychological narrative if you are a non-believer precisely because it actually is a narrative. Saying ‘it didn’t happen, it’s all just made up’ seems somewhat trite, doesn’t it? Plus, the point of this report was to cause people’s faith to be shaken, not to report on it. What would be the point of reporting “this just in, there is no absolute proof that Jesus walked on water.” Duh!

Unfortunately, our intuitive sense of rationality fails us here. We have a tendency to naturally favor silly and even outright irrational narratives over non-narratives, as is the case here, because we latch uncritically onto narratives that match our point of view.