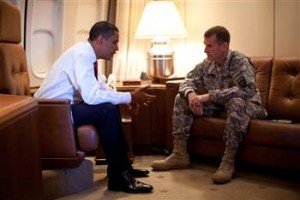 A recent ABC News-Washington Post Poll shows only 45 percent of respondents approve of  President Obama’s handling of the war in Afghanistan.

Forty-five percent now approve of the president’s handling of the situation, down by 10 points in a month, 15 points since August and 18 points from its peak last spring. His approval rating on Afghanistan has fallen farther than on any other issue in ABC News/Washington Post polls this year.

What do you think President Obama should do in Afghanistan?

35 thoughts on “Random Mormon Poll #14: What to do in Afghanistan?”