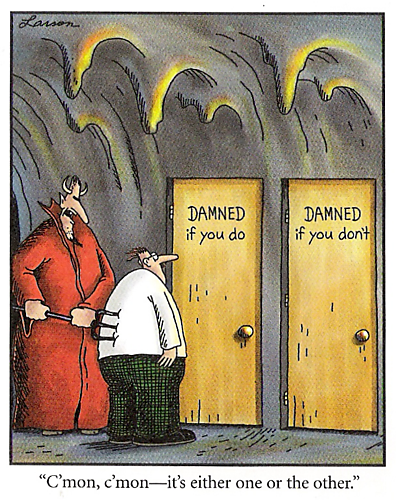 3 Therefore, aprepare thy heart to receive and bobey the instructions which I am about to give unto you; for all those who have this law revealed unto them must obey the same.
4 For behold, I reveal unto you a new and an everlasting acovenant; and if ye abide not that covenant, then are ye bdamned; for no one can creject this covenant and be permitted to enter into my glory.
5 For all who will have a ablessing at my hands shall abide the blaw which was appointed for that blessing, and the conditions thereof, as were instituted from before the foundation of the world.
6 And as pertaining to the new and aeverlasting covenant, it was instituted for the fulness of my bglory; and he that receiveth a fulness thereof must and shall abide the law, or he shall be damned, saith the Lord God.
Comments? Anyone?

53 thoughts on “Friday Forum: Doctrine and Covenants 132:4-6 “If Ye Abide Not That Covenant, Then Are Ye Damned””