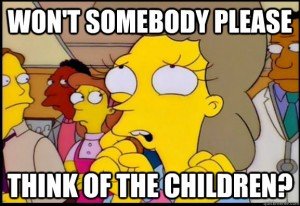 There have been plenty of good posts/comments on the latest controversy (but even more not so good ones).  I don’t see the use in arguing for a policy that allows children to have too much cognitive dissonance between home life and Church life (we all have some, of course).

However, I think the concern for children is a smokescreen.

Every single person (that I have seen, in the initial flurry of commentary) crying out “won’t someone think of the children” and acontextually citing (aka wresting) “let the little children come to me” is someone who wants the church’s policies on LGBT+ (or whatever the current euphemism is) relationships to be more liberalalized/progressive.

In other words, “the children” are a smokescreen, an attempt to get otherwise faithful members to oppose the leaders of the Church through other means.

Some may have even, in order to reconcile the cognitive dissonance, fooled themselves into believing that “the children” are their main concern – as if their years (sometimes decades) long commentary and commitment to disagreeing with the Church over LGBT+ issues isn’t their real motivation.

Don’t be fooled, and don’t allow concern for “the children” to trump loyalty to the church.

And go read this post on “entryism” at jrganymede, especially the last paragraphs – this is about the long term struggle for the soul of the church: “I think it may end up having a significant but ‘incidental’ effect in preventing entryism by those with a homosexual agenda. ‘OK, maybe we can’t participate in your ordinances, but our kids will be baptized members, and their loyalty will be to us gays.’ Not so fast.”

[At the same time, let’s not get into name-calling and calls for cleansing of the Church.  I’ve seen people I generally agree with behaving rather badly about this on social media.  The ultimate end goal is full fellowship with the church and true reconciliation with the will of God; some people have a longer, more windy path to get there.  I think any cleansing will be mostly self-selected, and I will sorrow at every lost soul that leaves the church over this – but I won’t let that sorrow lead me to argue the Church needs to change.]

43 thoughts on “Children as smokescreen”