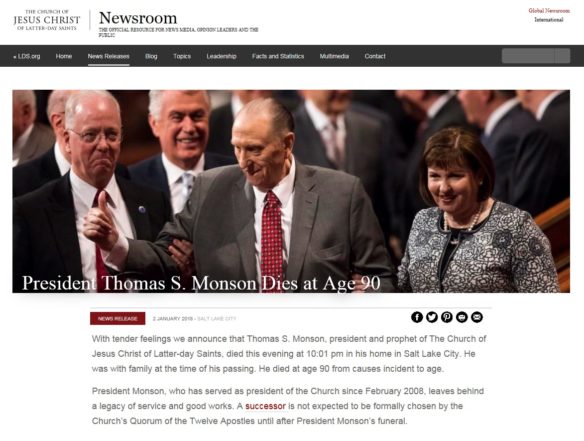 President Thomas S. Monson passed away of natural causes on January 2, 2018. He had celebrated his 90th birthday in August 2017.

Thomas Monson became an apostle in the Church of Jesus Christ of Latter-day Saints in 1963 at the age of 36. He became President of the Church in February 2008. His ministry was characterized by love of people, a love which often broke down seemingly insurmountable barriers. For example, he was the driving force behind the agreement of East Germany to allow a LDS temple to be built behind the Iron Curtain, as so many Mormons from East Germany were seeking to travel to Europe to attend temples in non-Communist Europe.

As an apostle, Thomas Monson would often tell stories from his tenure as bishop in Salt Lake City, where his large Ward included many widows. His care for those relying on him as bishop gave us a window into what it meant to care for the widow and the fatherless, yet President Monson would tell the stories with self-deprecation, always amazed at the goodness of the people he served and often admitting his own failures to strictly heed every prompting.

As a senior apostle and Church president, Thomas Monson would often talk of his childhood, where he portrayed himself as an unruly and problematic child. His addresses were often centered around amusing stories of how he had been lovingly corrected in his youth.

One particularly memorable story was told in April 2013, of a time when he and a friend decided to clear a field by burning the grass, apparently thinking the flames would magically extinguish themselves once the task was complete. Though the story was amusing, the clear warning was that when we attempt to take shortcuts to get to a desired end, things can get out of control. It does not seem coincidental that the Ordain Women organization was founded the following month, eventually leading to the excommunication of its founder, Kate Kelly. Around the same time Kelly was excommunicated, long-time activist John Dehlin was also excommunicated. Dehlin had for years prior to 2013 been suggesting that Thomas Monson was not fit to preside due to increasing dementia associated with his advancing age. Dehlin had also been providing guidance to people on how to transition out of the Mormon faith.

After I learned of Dehlin’s comments, I watched for how President Monson comported himself. I was frankly amazed at how well an allegedly impaired man was able to carry out the public duties of his office. And I became extremely grateful that Joseph Smith appears to have created a leadership  structure prior to his death 1 whereby many individuals together hold the keys, in support of the one individual at the head of the Church who has the right to preside (see D&C 24).

Before Thomas Monson ascended to the position of LDS Church President, he attended a Stake Conference in the Provo Tabernacle while I was visiting family. The theme was Church music and, though I love music, I found the conference suffering in comparison to other conferences of my experience. Then the pulpit was ceded to Thomas Monson, who was merely in attendance because a family member was being advanced in the priesthood. President Monson stood and began to speak, and the conference went from being one of the weaker Stake Conferences in my experience to being one of the best. But being from the East Coast, I became concerned when I saw that the noon hour was approaching with no hint that President Monson’s comments were drawing to a close. The entire audience remained rapt until, several minutes after the hour, President Monson glanced at a clock and proceeded to gracefully bring his comments to a close. Once I was at home dining with family, I mentioned how odd it was for a Stake Conference to run over like that. Everyone else (and there were many “everyone elses”) looked at me strangely and insisted they hadn’t noticed the time.

According to precedent, it is expected that the senior apostle, based on date of being ordained an apostle, will be announced as the next LDS Church President. At this time the senior LDS apostle is Dr. Russell M. Nelson, who was ordained an apostle in 1984. Prior to being called to serve as an apostle, Dr. Nelson had become internationally acclaimed for his skill and advancements in cardiothoracic surgery. Dr. Nelson was ordained an apostle nearly a month before the other individual called at the same April conference, then-Utah Supreme Courth Justice the Honorable Dallin H. Oaks. Dallin Oaks was given the extra weeks to wrap up his judicial commitments before devoting his time to an apostolic ministry.

For many months now my autistic daughter has been praying for Thomas Monson every time it was her turn to voice a prayer. She would plead for him to have strength and lack of pain in these last days before his passing. When I told her President Monson passed away yesterday, she cried out in dismay and began to sob. She repeated again and again that President Monson has been the best President of the Church in her generation.

I am older, and I have been aware of the LDS Church Presidents who have served from David O. McKay to Thomas S. Monson. Each has had their well of strength and deep compassion. Each had their human side that made me glad.

I look forward to the likelihood that Dr. Nelson will succeed Thomas Monson as Church President. I first met Dr. Nelson when he was a new apostle retracing Paul’s journey to Rome. I remember playing my violin at the special missionary conference where he taught us. I remember standing in the EUR chapel in Rome at the fireside he and his wife gave, and how he slipped mid-sentence from speaking English to speaking grammatically perfect Italian (albeit with a Utah accent). And I remember noting when Dr. Nelson used an unusual phrase, rarely learned by missionaries. The emerging disbelief in the room was palpable, and I felt it almost as a wave growing around the perimeter where we missionaries were standing until it reach Dr. Nelson. Once that unseen wave reached Dr. Nelson, he seemlessly switched from Italian to English and his translator resumed his duties.

I talked with some of my fellow missionaries afterwards, and they commented on the strangeness of a gift of tongues involving grammatical error. I corrected them on their misimpression that it had been a grammatical error. Then I talked with a recent convert I had worked with. Marina spoke of being able to understand Sister Nelson before the translator rendered the meaning in Italian.

As for me and my household, we will mourn President Monson. And we will sustain whoever is announced as the new Church President. And when a new individual is presented to us as the newest apostle, we will sustain them as we sustain all who currently serve in that calling.