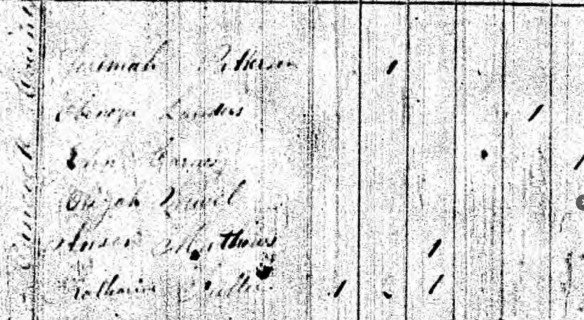 This past weekend I was at Nauvoo for the Untold Stories Symposium. My topic was Catherine Laur Fuller Warren and her testimony against Dr. John C. Bennett. The audio below was recorded live, with minor edits to make it shorter (30 minutes vs. longer) and less blooper-filled. The powerpoint file for the presentation is also attached.

This, I felt, was the core of the new paradigm I have explored in my Faithful Joseph series. This is the previously untold history that is key to understanding everything else that happened in Nauvoo.

The trip to Nauvoo provided some interesting insights:

Something else I’ve noted in my various studies since 2013 is that there appear to be two very small periods of time when we see plural wives of faithful men conceive. The first window was April 1843. The second window starts in May 1844. Based on this, I suspect that if Joseph did consummate any of his plural marriages, it would be during these two windows of time. So while I may not be entirely convinced he consummated any of his plural marriages, I would be willing to allow as possible reported interactions that appear to have occurred during those windows. Specifically, I might be willing to allow the reports regarding Emily Partridge (her own statements) and Malissa Lott (someone else reporting her statement). However, this isn’t a Nauvoo insight, per se.

For what it’s worth, the presentation appears to have been well-received. No rotten tomatoes. No one even challenged me on any facts. This core story is solid, and since no one really cares about Catherine Fuller, no one is offended to learn what happened to her. Except I care, and I am offended on her behalf, as I mention in my talk.