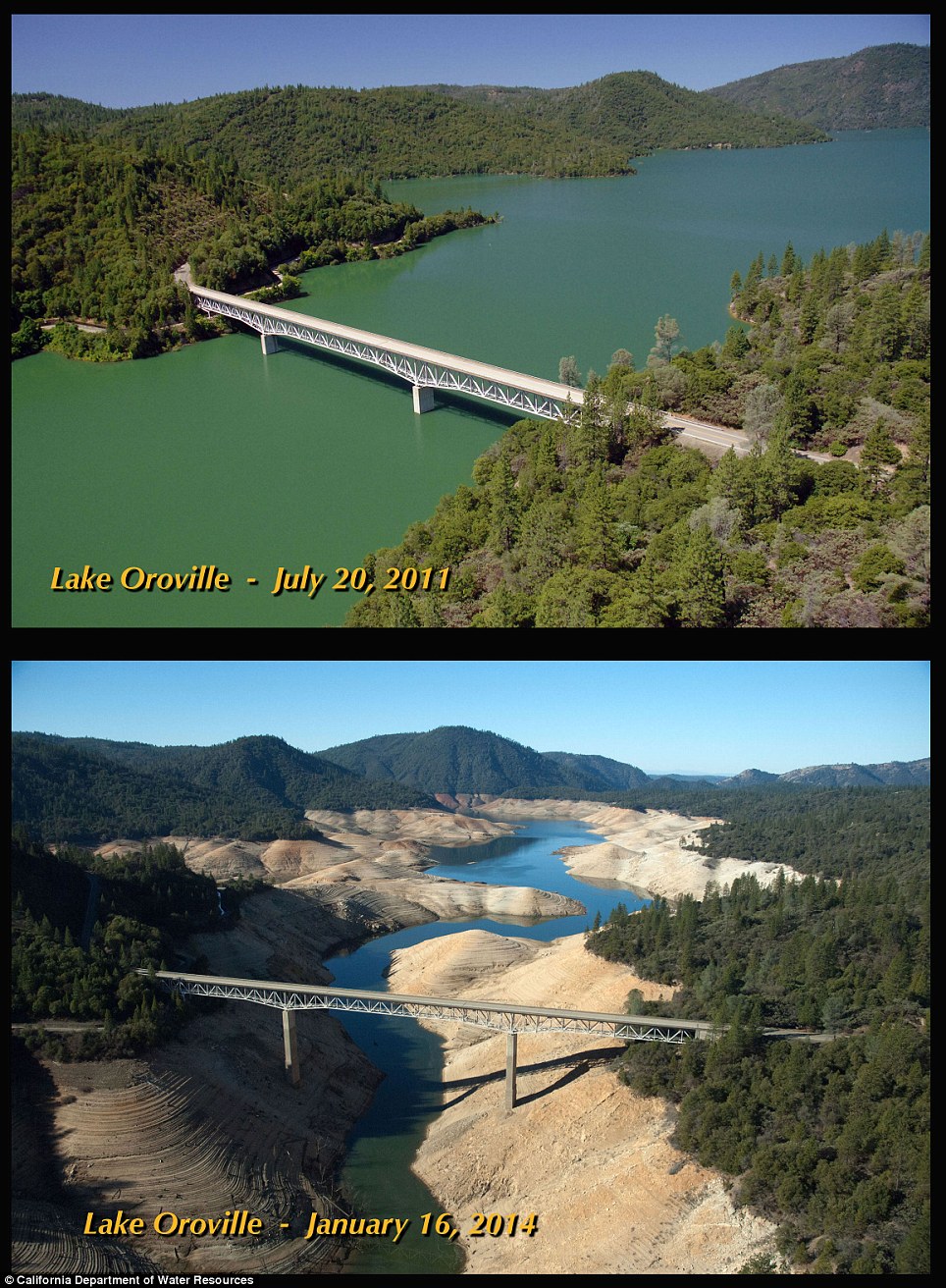 If you’ve paid any attention at all to the news, you’ve heard that the west is experiencing drought conditions. People throughout the west are being asked to take shorter showers or landscape their yards in ways that conserve water. But in California, 80% of the water “taken” from the environment goes to grow food.

From pictures like these 1 showing record low water levels in rivers and reservoirs, we can see the drastic change in surface water levels.

What these pictures of surface water don’t show, however, is the loss of ground water from California aquifers, earth’s “water batteries.” California has lost an estimated 63 trillion gallons of water from her aquifers since the beginning of 2013. 2

Why does it matter? It matters because water is food. And California provides 50% of the food eaten in America.

The average person has no idea what 63 trillion gallons of water means. So let’s calculate the amount of food that water grew in terms of feeding America.

So we can figure the number of days the amount of lost groundwater might have fed America:

However the 2,055 gallons needed to produce daily food for an American is excessive. The water budget available to grow food for individuals (divided by the world population) is only 890 gallons per person. In countries like Chile and China, the amount of water required to produce the food is less than 450 gallons per day per person.

So if America ate like the rest of the world, the lost water could have fed us for roughly a year. And now it’s gone. These numbers don’t include the droughts in other south-western states, such as Texas, or the excessive extraction from other aquifers, such as the Ogallala aquifer under the great plains where cattle and grain are raised. 8

When an aquifer is emptied, it takes more than one or two rainy years to replenish ground waters. For example if the Ogallala aquifer were to be completely drained, it would take 6000 years of rainfall (without human extractions) to replenish the aquifer to pre-industrial levels.

America isn’t the only country experiencing drought conditions. This morning NPR aired a conversation with Lourdes Garcia Navarro and Carrie Kahn, discussing the impact drought is having in Mexico and South America. 9

These reporters were loathe to attribute the drought to any single cause, such as global climate change, however the impact on communities has been unequivocally dire. Examples of recent South America headlines include:

In Sao Paolo, Brazil, one of the main reservoirs is expected to run dry in 3 months. In Guatamala, 170,000 families have lost almost their entire crop due to the arid conditions. Many of the areas affected by drought in Latin America are already poor. Whether poor or rich, people need water and food to survive.

Just this month, the USAID Famine Early Warning Systems Network sent an alert that four northern countries in Central America will experience rapid deterioration in food security by the first part of this year. Carrie Kahn said these countries will need humanitarian assistance comparable to the assistance required in 1998, when Hurricane Mitch devastated the region, resulting in more than 100,000 refugees coming to the U.S.

Much of Europe and Asia are experiencing water stress. A particularly striking example is the water removed from the Aral Sea, once the second largest sea in the world.

A second set of images shows that the Aral Sea has continued to decline since the 2007 satellite image shown above: 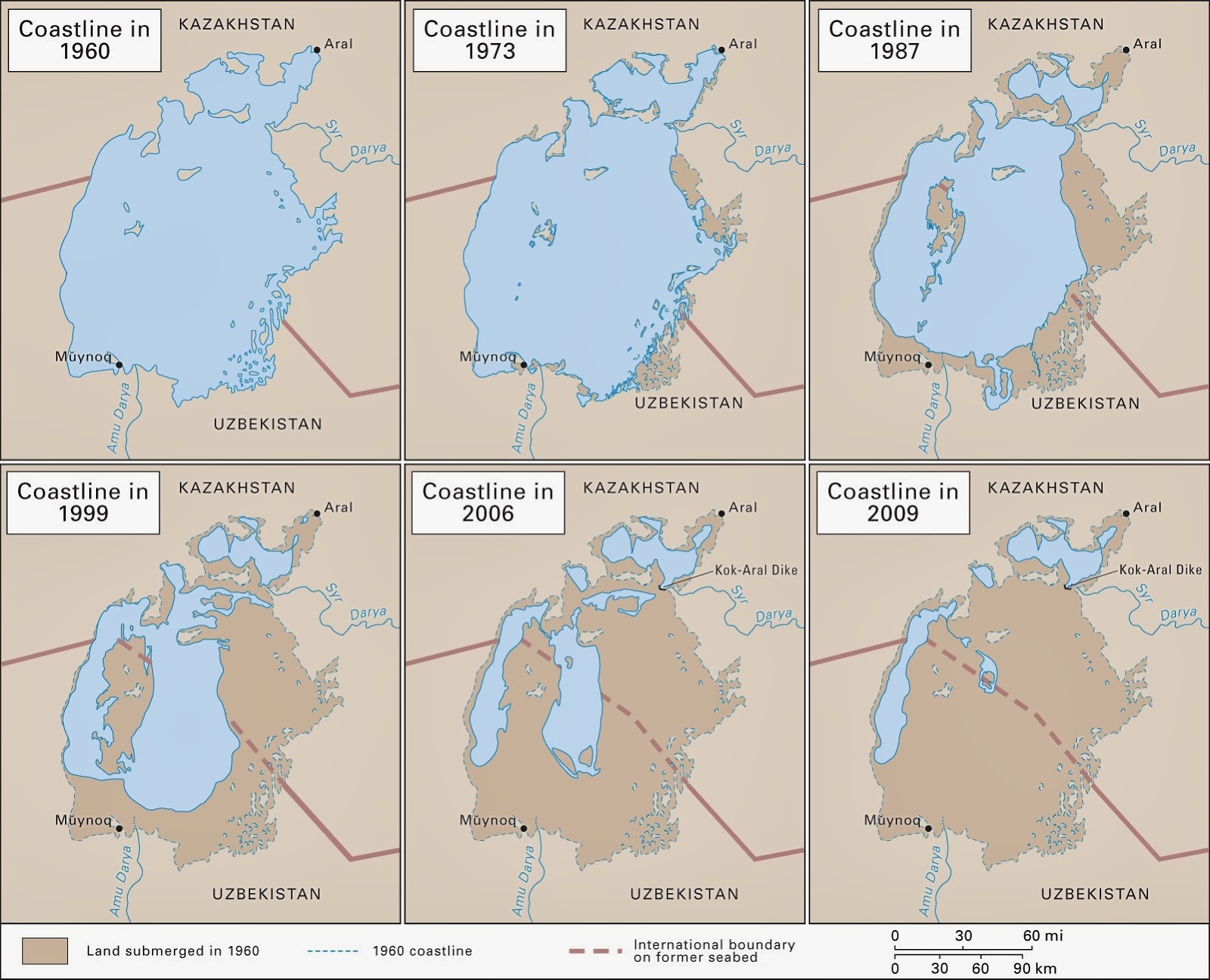 In Spain, this year’s drought conditions are projected to reduce yields for key crops like olives and olive oil to a mere 40% of harvests from prior years. 10

In 2011 an intense drought in East Africa created one of the worst humanitarian challenges of the year, causing an estimated 260,000 deaths. 11

This year drought and climate change are thought to have played a role in the Ebola outbreak in West Africa, with the stress on food resources for both humans and wild animals, like fruit bats, forcing interactions that would not have occurred otherwise. 12

The Words of Isaiah

Whenever one reads biblical forecasts of disaster, it is hard to determine which of the many bad things occuring in our past correlates with the particular prophetic vision. However it is hard not to see our day in Isaiah’s words:

And the waters shall fail from the sea, and the river shall be wasted and dried up.

And they shall turn the rivers far away; and the brooks of defence shall be emptied and dried up: the reeds and flags shall wither.

…Every thing sown by the brooks, shall wither, be driven away, and be no more.

The fishers also shall mourn, and all they that cast angle into the brooks shall lament, and they that spread nets upon the waters shall languish.

Moreover they that work in fine flax, and they that weave networks, shall be confounded.

And they shall be broken in the purposes thereof, all that make sluices and ponds for fish. 13

In our global economy, the drought doesn’t have to be in your city to affect you. There are three things we can do as individuals to prepare ourselves:

1. Gather or maintain a year’s supply of basic food stuffs. This has been the advice from Church leaders ever since it was obvious the Mormons would be driven from Nauvoo. Today’s advice suggests that your keep 3 months of regular food at the ready, with an addition 9 months of basic material for basic sustenance (e.g., beans and grain). For more information, visit lds.org or providentliving.org.

2. Begin to eat foods that require less water. We all need to keep eating, but we can significantly reduce our personal contribution to water stress by eating foods that don’t require as much water. The Word of Wisdom gives some great tips:

3. Grow a sustainable garden. There are any number of spiritual and emotional benefits of getting out in nature making food grow. Eating your stores of beans and rice is so much more palatable if you can add vegetables and herbs from your garden. But growing a garden using old school methods can waste a lot of water. Consider using techniques like aquaponics, targeted irrigation, or hydroponics to minimize water losses. Aquaponics, for example, can save 90% of the water you would need for a traditional garden.

There will be those who presume this water stuff is someone else’s problem. They will refuse to have compassion on those who find themselves in extremis, particularly those who are not from “their” country. They will continue to eat hearty meals and drink fancy beverages without regard to the water cost. They will routinely buy new things they don’t need, silver and gold, and rather than worship God or heed his messengers, they will worship the work of their own hands and the imaginings of their hearts.

But those who are wise will take stock and prepare.

65 thoughts on “The Waters Shall Fail – Get Prepared”