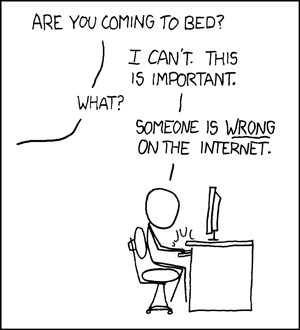 Recently, I’ve been thinking about my own combative habits online. I’m attracted to controversy, and I love picking a fight with people who disagree with me. Arguing politics on Facebook is a particular weakness of mine, and after an argument, I’m often tempted to blog about the dispute, present my opinion, and look for allies among my readers to help bolster my opinion.

However, I’ve realized that philosophy, reason, and argument can be used to rationalize almost any ideological or philosophical system of thought. This leads to at least 2 implications: (1) reason is often not a conduit to truth, but simply a tool we use to rationalize the actions and beliefs we’re already committed to, and (2) reason is not always a reliable way to persuade others of our beliefs, since it can be used to justify other’s beliefs as well.

So, sure, I could potentially persuade someone to adopt a libertarian worldview using reason. However, using the same tool of persuasion, I could just as easily defend an entirely contrary system of thought. In the same way, I can present a Mormon worldview using reason and logic, and possibly convince others. But that isn’t going to bring others to truth, and certainly not to Christ.

How then do we come to know what is true? And how do we rightly persuade others to embrace it, if reason and logic can serve any master? The answer to both questions is clear: “By the power of the Holy Ghost ye may know the truth of all things,” and “the power of the Holy Ghost carrieth it unto the hearts of the children of men.” Only the Spirit can clear the muddy waters of our intellectual discourse, and only the Spirit can persuade others of the truths that we teach.

How often do we call upon the Spirit when we are blogging? I know that in months and years past, I haven’t called upon the Spirit nearly as often as I ought to have. I realized I need to rely on the Spirit as I write, and to ask God to send the Spirit to those who read. Although each post I write is simply my thoughts and perspective on the issues at hand, I find that there’s power in praying and asking God, “If there is something in this post that one of my readers can learn from, please send the Spirit to testify of it. Reason, eloquence, and argument alone can never bring people closer to Thee. Only the Spirit can, and so help me to write by the Spirit, and those who read to read by the Spirit.”

But, this put me into another quandary. Do I really want to ask God to testify of the truth of everything I write? Good Latter-day Saints can disagree about a lot. Do I really want to ask God to convince people of the truth of my limited perspective on politics? I don’t think that is right. I don’t really want my prayers to turn into the prayers of an athlete praying that God will lead him and his team to victory, while at the same time knowing that the athletes on the other team are doing the same. I don’t want to call upon God’s help to win the game unless the game really is worth winning, and if I really feel I am advancing God’s kingdom.

In fact, I’m convinced that the a difference between the reason and the Spirit is that while reason can serve any master, the Spirit only serves one. Not only is the Holy Ghost is the only way to bring someone to Christ, I believe it only responds when we are acting on behalf of Christ. And when it does respond, it is far more powerful than the most eloquent, rational argument that has ever existed. It is the “secret weapon” of the Lord’s Kingdom.

This leads me to an important question: who/what is my master?

Is my master an ideology, such as classical liberalism, Mormonism, or constitutionalism? If so, then I can use reason, logic, and eloquence to argue the minutia of my philosophy to my heat’s content. And they may be the only tools available to me, because I’m not so sure the Spirit will come to our rescue to help us if our master is an ideology or a philosophy.

Is my master a person, whose name is Jesus Christ? If so, then I may call upon the Spirit to assist me in persuading others as I write. This doesn’t preclude me from discussing philosophy, ideology, or systems of thought, but if I am doing so in the service of Christ, then the Spirit will guide and assist me. I’ve just got to be darn sure (and not just because I’ve rationalized myself into believing so) that I’m serving Christ, not a philosophy.

I can’t generalize my experience to others. All I can do is report my own experience. When I think of Christ as my master, rather than an ideology or system of thought, the way I blog changes dramatically. Before writing a post, I end up asking God, “Is this a message that you want me to publicize?” The topics of my blog posts change, and their tone and content changes as well. I have found myself more reluctant to proselyte the ideological “isms” I typically adhere to, and more eager to simply witness of the things that bring me closer to Christ. I suppose this doesn’t mean God disapproves of the ideologies I most often profess. Rather, perhaps it simply means that maybe they’re not as important to Him as I sometimes convince myself they are.

Over the past 4 weeks, I’ve started half a dozen blog posts that I’ve never finished, and have written half a dozen blog posts that I never thought I would write. Why? I don’t really know. All I know is that when I pray as described above, the things that I write about become less ideological, more experiential, and more centered on inviting others to come unto Christ.

I’m reminded of one of my favorite seminary videos, a masterful re-enactment of Brigham Young’s conversion story. I’ll embed the video as soon as Youtube embedding is enabled on this blog. For now, go and watch the video (and note the impressive similarity between the actor in the video and the portrait on the left). For those who can’t, here’s a (rather lengthy) excerpt from Brigham Young’s sermon on the subject:

It is always peculiarly interesting to me to hear the Saints tell their experience. It is to me one of the best of sermons to hear men and women relate to each other how the Lord has wrought upon their understanding, and brought them into the path of truth, life, and salvation. I would rather hear men tell their own experience, and testify that Joseph was a Prophet of the Lord, and that the Book of Mormon, the Bible, and other revelations of God, are true; that they know it by the gift and power of God; that they have conversed with angels, have had the power of the Holy Ghost upon them, giving them visions and revelations, than hear any other kind of preaching that ever saluted my ears.

If I could command the language and eloquence of the angels of God, I would tell you why, but the eloquence of angels never can convince any person that God lives … independent of that eloquence being clothed with the power of the Holy Ghost; in the absence of this, it would be a combination of useless sounds. What is it that convinces man? It is the influence of the Almighty, enlightening his mind, giving instruction to the understanding. … Those who are governed by this influence lose sight of all things pertaining to mortality…

Anything besides that influence, will fail to convince any person of the truth of the Gospel of salvation. This is the reason why I love to hear men testify to the various operations of the Holy Spirit upon them—it is at once interesting and instructive. … But the case is quite different with those whose minds are not opened and instructed by the power of God. Sermonizing, dividing, and subdividing subjects, and building up a fine superstructure … calculated to fascinate the mind, coupled with the choicest eloquence of the world, will produce no good to them. …

If all the talent, tact, wisdom, and refinement of the world had been sent to me with the Book of Mormon, and had declared, in the most exalted of earthly eloquence, the truth of it, undertaking to prove it by learning and worldly wisdom, they would have been to me like the smoke which arises only to vanish away. But when I saw a man without eloquence, or talents for public speaking, who could only say, “I know, by the power of the Holy Ghost, that the Book of Mormon is true, that Joseph Smith is a Prophet of the Lord,” the Holy Ghost proceeding from that individual illuminated my understanding, and light, glory, and immortality were before me. I was encircled by them, filled with them, and I knew for myself that the testimony of the man was true. … My own judgment, natural endowments, and education bowed to this simple, but mighty testimony.

… The world, with all its wisdom and power, and with all the glory and gilded show of its kings or potentates, sinks into perfect insignificance, compared with the simple, unadorned testimony of the servant of God.

There is a strong temptation when blogging to skirt with controversy, to wrestle with ideology, and to argue philosophy. It attracts readers, it attracts conversation. I’ve noticed that many fewer people will comment on a post that simply testifies of Christ than will comment on a post about Keynesian economics. And talking about these things is not bad at all. Anyone who knows me knows I run a blog devoted to the exploration of philosophy and ideas. I don’t intend to abandon that at all. I just wonder if we should spend equal time witnessing of our own encounters with the Spirit, our own experience with the Atonement, and our own testimony of Christ.

Often, people complain that the “bloggernacle” is populated by dissidents, disbelievers, and skeptics. I’ve attempted to help saturate the blogging world with responses to the ideology espoused by those who disagree and criticize the Lord’s spokesmen. I wonder if a better approach, however, is to saturate the blogging world with first-hand witnesses of Christ, of the Restoration, and of the Spirit. And kneeling and asking God to help us write with the Spirit, and those who read to read with the Spirit, is much easier in this endeavor than when we are battling or defending philosophies, ideologies, and all the “isms” that are potential red herrings or distractions from the work of God.

4 thoughts on “Seeking the Spirit When Blogging”