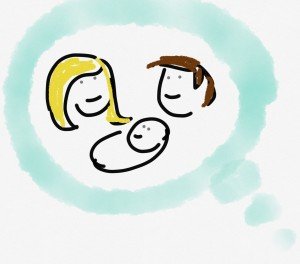 I was recently alerted to a new study on risk for children as a function of parents. The study of over 200,000 children (some 500 of whom are being raised by parents of the same gender) is that children raised by both their biological parents fare best, when one controls for other factors.

The study was titled “Emotional Problems among Children with Same-Sex Parents: Difference by Definition” by Donald Paul Sullins of The Catholic University of America, January 25, 2015.

I was able to find the study at this link. I see there is now a link in the sidebar to this study as well.

I was surprised by the introduction, which asserted that many studies have found children raised in households where both parents are of the same gender had been found to have improved outcomes. This surprised me because the studies I had read consistently indicated that children in same gender households did not do as well, controlling for variables.

I mean, a loving same gender household might well be expected to raise children with an improved outcome compared to a household led by irresponsible and violent substance abusers who happen to be heterosexual. So I can fully understand why people could look at a particular instance and assert that a same gender couple is preferable. But I don’t know why anyone would assert that a child raised by a same gender couple would have a better outcome than a child raised by a heterosexual couple, all other things being equal.

The concern is that these prior findings, that children allegedly fare better in households headed by same gender couples, have been used to sway judges and courts to award children to same gender couples. Which is fine, unless the findings are in error.

The key finding of this study is that risk is lowest when both parents are the biological parents of the child.

Certainly one can assert that this shouldn’t matter. But here’s the rub. It does appear to matter.

The Study used the phrase “difference by definition.” Reading a bit, it appears this refers to the fact that a same-gender couple, by definition, can never be or even be mistaken for the two biological parents of the children being raised by the couple.

What is to be Done?

If I were an advocate for same-gender parental rights, I would presume that the solution to this “problem” is to deprecate the importance of biology. In this manner, any “benefit” a child derives from knowing it is being raised by its biological parents would cease to be a differential benefit that improves the comfort children derive from knowing that their parents are biologically vested in them.

However, as I don’t have a stake in same-gender parental rights, I wonder why one would strip away the benefit children of biological parents derive from knowing that they are the biological get of their parents?

In the Mean Time

Until such a time as all children are loved by all members of the community as though those children were biologically related to each member of the community, it seems prudent to inform prospective parents and other decision makers that:

1) Children do better when raised by their biological mother and biological father, all other factors being equal.

2) Children raised in same gender households, unless raised to be completely ignorant of biological fact, necessarily know that they aren’t the biological get of both their parents. Something about being raised by less than both the biological parents increases risk to the well-being of the child.

The Risk of Messing with Biology

Though not covered in the “Difference by Definition” study, there appear to be additional risks associated with this business of providing children to same gender couples.

0) Seemingly lowest risk would be a child engendered naturally (normal intercourse between the biological mother and biological father) and then raised by a same gender couple, where a biological parent is one of the parents raising the child.

2) A child produced using in vitro fertilization runs the risk of the egg-harvesting process harming the mother from whom the eggs are harvested. The challenge here is that no studies are being performed to evaluate the health outcomes for women who donate eggs. There are anecdotes regarding women who have gone through the process of donating eggs who later developed a rare and fatal form of cancer. In the case where the mother from whom the eggs are harvested is one of the parents raising the child, health risks to the woman translate into risk to the child. Whether the woman allowing eggs to be harvested is a parent raising the child or merely a donor, the other unanswered question is what risk is borne by a child produced using these chemical and mechanical manipulations.

3a) For a child gestated by a woman who is “donating” her uterus for the service, there is risk to both the gestating mother and risk to the child. The risk to the gestating mother is the standard risk profile any pregnant woman accepts, with the potential for added risk that might be incurred due to the artificial nature of the insemination. As a mother who has borne children, this is a risk I have accepted myself. But to take this on merely for money is a different matter. I am not sure how well this medical procedure is regulated, and this seems a practice that is ripe for involving exploitation of vulnerable individuals. For example, how many CEOs of successful companies do you see renting out their uterus out of altruistic sentiment?

3b) A child being gestated by a woman who is neither the biological parent nor a parent who intends to raise the child runs the risk of that woman being careless in caring for the task of gestating the child. There are plenty of women who drink or smoke or fail to keep pre-natal visits, but at least if the woman is gestating her own child, there is some self-interest (even if self-interest that is being thoroughly ignored). But a woman gestating a baby for pay alone will have even less incentive to avoid activities that might be dangerous to the baby. Recall that a woman gestating a baby for pay is likely not well-to-do economically or socially.

4) A child created using donated sperm will not be able to trace medical history. I am also unaware of legitimate means of inseminating a woman other than traditional sex and in vitro means that involve egg harvesting, already mentioned above.

Making babies is risky business. Alas, if no one were to make babies, then the outcome for the species would be bleak indeed.

When we control for other variables, a child who is raised by their two biological parents will fare best.

A child raised by a same-gender couple will not fare as well.

The technologies used to produce children for couples who cannot naturally engender a child carry risk to both the child and the woman/women who contribute to the genetic heritage and gestation of the child.

19 thoughts on “The Importance of Biology”