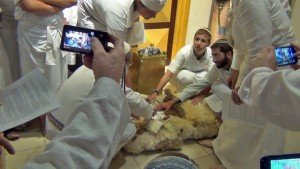 Sons of Aaron being instructed on the ceremony of animal sacrifice

“…For  the sons of Moses and also the sons of Aaron shall offer an acceptable offering and sacrifice in the house of the Lord, which house shall be built unto the Lord in this generation, upon the consecrated spot as I have appointed”  D&C 84:31

To recap, I was introduced to the Temple Institute in 2009 and since that time I have eagerly watched the events surrounding the Temple Mount in Jerusalem via the facebook group. You can find my first post here. The Temple Institute is a Jewish religious organization dedicated to every part of the commandment to build the Third Temple. The members of the Temple Institute, lead by Rabbi Yisrael Ariel, combine prayer and mourning ( Tish’ab’Av) with the Principle of Action.

Rabbi Ariel clearly demonstrates in his writings, the belief and conviction, as emphasized by Torah scholars and luminaries of earlier generations, that every generation is obligated to do all within its power towards rebuilding the Holy Temple. This, as opposed to those who believe that we must wait for the Messiah to arrive before it can be rebuilt. 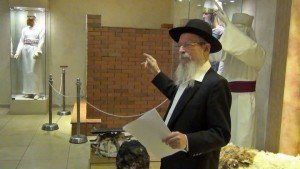 On August 20, 2013, the Temple Institute along with the Mishmeret Kehunah (the Organization for the Renewal of the Priestly Shifts) created a new school dedicated to teaching the Kohanim (descendants of Aaron) the art of performing the temple services.

That evening, for the first time since the destruction of the Holy Temple, a historic practice drill of the daily Tamid offering was reenacted by a group of contemporary kohanim-in-training.  This event brings the time of the renewal of the Divine service closer than ever before!

The kohanim-in-training went thru a semi-dress rehearsal of the entire daily service from start to finish, reenacted step by step. All these activities as described in the Mishna and other sources of Torah understanding.The kohanim were dressed in the sacred priestly garments, manufactured for temple ceremony, and were barefoot, as shoes are forbidden  within the confines of the Holy Temple. The August 20th evening was described as:

“An atmosphere of great excitement prevailed throughout the entire evening and profoundly affected all those assembled – ‘players’ and audience alike. All were emotionally charged and visibly moved with the knowledge that here in Jerusalem, these sacred tasks are being reenacted, for the purpose of studious preparation, for the first time since the destruction of the Holy Temple. Despite the limited space and all the typical pressure which accompany first time efforts, the overall effect was spell-binding, as we witnessed a sacred ceremony, first described in Torah four thousand years ago, yet not attended to for two thousand years of exile, suddenly come to life before our very eyes. All at once, ancient texts and descriptions took shape as today’s descendants of Aaron, the first high priest and father of all kohanim, worked diligently to perform their assigned tasks.”

Welcome Back Sons of Aaron! I join with you in the hope you will soon, and once again, perform your sacred tasks in the 3rd Temple.

Also interesting to note, the destruction of ancient Jewish temple artifacts, by Waqf a Jordanian Muslim organization that controls the Temple Mount. Also the holes that have opened up beneath the Al-Aqsa (near the Dome of the Rock) Mosque.

Also, if you visit Israel, you may tour the Temple Institute Visitor’s Center.