In May 2009 I allowed the BBC Britain to bring two troubled British teens to my home to make a show called “The World’s Strictest Parents.”  They brought me two seventeen year olds named Hannah and James.  For two days Hannah and James had tantrums and tried every way they could think of to initiate power struggles and force us to become aggressive.  This is generally called, “button pushing.”  What they didn’t know was that I got rid of all my buttons long ago.

On day three the teens were all of the sudden completely different.  They were obedient and generally wanted to communicate effectively.  I was really impressed with their new personalities.  I said to Hannah, “Hannah, why did you suddenly stop yelling and getting angry?”

She said, “Well, at my house if I yell I get my way or someone at least yells back.  But, here you always stay so calm that it doesn’t do any good.  So, I just figured I might as well try staying calm too.”  Because Hannah saw that her aggression wouldn’t work, she was able to completely change the way she communicated.  So what did Hannah give up her aggression for? END_OF_DOCUMENT_TOKEN_TO_BE_REPLACED 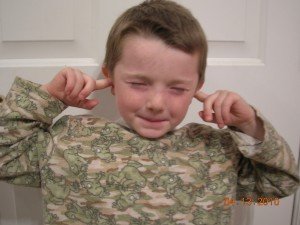 “What about when they say, “I didn’t hear you” as their reason/excuse for not following instructions…but you think they must have?”

This is a classic!  It is either one of two things.  Either your child really didn’t hear you, or she just lied to try to make the reason she didn’t follow instructions look like your fault instead of hers.

If you are constantly hearing this excuse for instructions not being followed, then you should first ask yourself, END_OF_DOCUMENT_TOKEN_TO_BE_REPLACED