In the wake of the unsuccessful Republican-led fight to defund Obamacare, and the shutdown of (a small part) of the federal government, many of my Republican friends are in despair and my Democrat friends are chortling with glee.

If you live in a world where you derive pleasure or become lugubrious because of the short-term tactical blunders of your friends or opponents, this reaction is very understandable.

I tend not to live in such a world. Make no mistake: my goal is to promote policies and ideas that decrease the size and power of government. This is the only solution to our long-term economic and societal problems. As such, I tend to look at things from a long-term perspective.

I don’t really care if the Republicans are well-positioned for 2014 or 2016, if all we are going to get from the Republicans is more Bush/McCain/Chris Christie, etc, etc, etc. I don’t see how that will resolve anything important.

If, however, we are creating the long-term conditions for a significant decrease in the size of government, then there are reasons to be optimistic.

With that in mind, let’s look at some (small) reasons for optimism.

Thanks to some very small cuts in spending and the sequester, federal spending is actually doing a bit better the last few years. 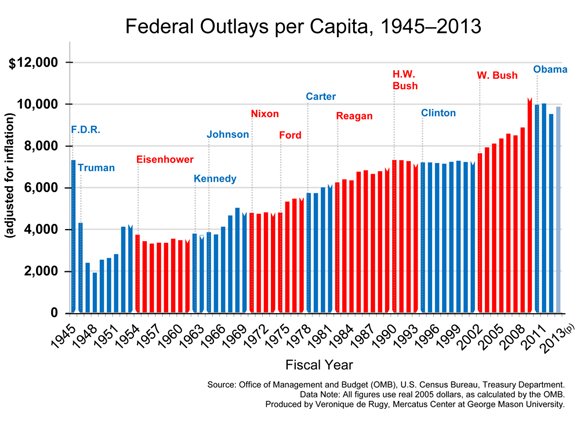 The spending cuts have improved the federal deficit picture in the short term. 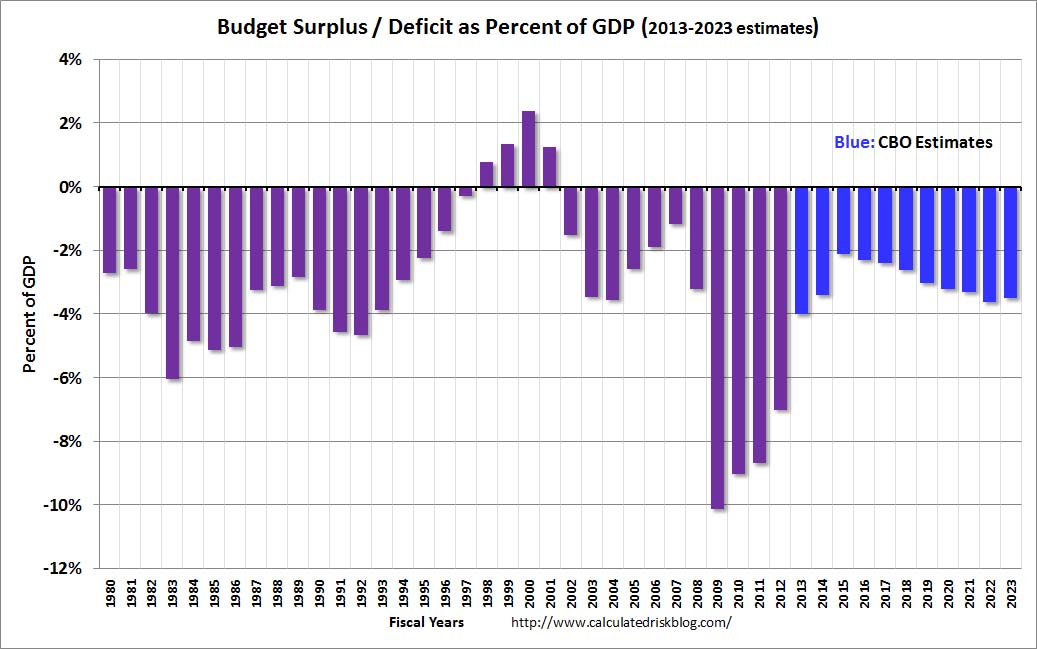 Notes: before you get all excited about how Obama has “improved the deficits,” please note that every Obama budget asked for huge increases in spending, and the budgets were unanimously defeated. In addition, please note that the deficit is a massive problem that is ruining the economy, causing widespread poverty and destroying the American middle class. So, please do not get sanguine about this situation. Also, please note that the deficit really gets out of control 10-15 years from now if we do not do anything about long-term spending, ie spending on Medicare, Social Security and Medicaid.

But, and let me emphasize this point, we really have done something to stop the runaway train of the Obama/Democrat desire to spend more on useless government projects. There is a lot more to be done, but at least we have taken a step in the right direction.

So, here is where the good news comes in.

Silver lining number one: the next sequester spending cut comes in January 2014. This is not an insignificant cut. Spending is, by law, to be cut by $50 billion in 2014 after a cut of $70 billion in 2013. This out of a total discretionary budget of about $1 trillion. These are the first real cuts in discretionary spending of any size since the 1950s. Again, these cuts are not anywhere near what I would like to see, but they are definitely steps in the right direction.

Silver lining number two: There will be more discussions about the budget and the debt ceiling in three months. There is still time for the hapless Republicans to get their acts together and come up with an actual strategy where they accomplish something.

Silver lining number three: There is a chance that the something that may be accomplished would be some kind of entitlement reform. There is a decent chance that the retirement age may be raised and that there may be other small changes in Medicare and Social Security that truly would help the long-term deficit.

Silver lining number four: Obamacare is, as I predicted multiple times, a dismal failure. The Democrats own this failure. How this plays out in the 2014 and/or 2016 election is beyond my skill set, but the message that “the government providing health insurance” is a good thing is increasingly seen as a joke.

Silver lining number five: The feeling that the government is failing (see Obamacare) plus the NSA, IRS and various other scandals is creating a very healthy anti-government wave. How this plays out in terms of politics is difficult for me to foresee, but I am encouraged to see young people increasingly regard the government as the problem rather than the solution. This gives me some reasons for optimism for the future.

All in all, there are reasons for optimism amid all of the negative trends in society these days. So, buck up people. There is a chance things might get slightly better.

21 thoughts on “Some silver linings amid the mess in Washington”