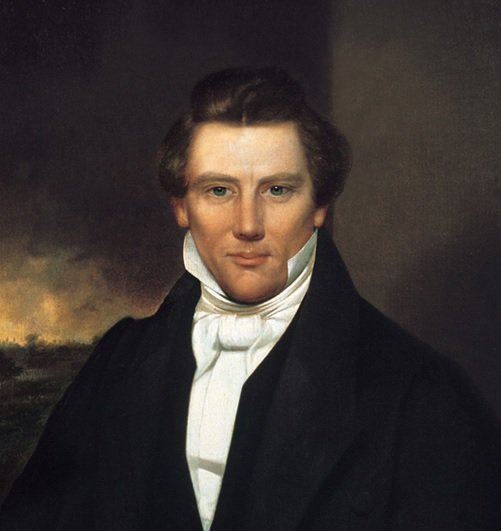 People always have the weirdest images of Joseph Smith added to their posts or dominating the covers of their books. I decided to go looking to see if I could find a picture that made me relatively happy.

In doing so, I tumbled across Kim Marshall’s blog, discussing a 2nd generation unedited photographic print copied from the original daguerreotype of Joseph Smith from 1840-1844. She clearly marks the images on her website as copyrighted, but the painting at the head of this post is obviously based on that original daguerreotype.

[Update – I now agree with those who assert that Kim Marshall’s photographic print is a photo of the painting, though a much nicer photo of the painting than the “photo” Joseph’s son submitted to the Library of Congress, the one with weirdly chopped off hair that is often used in articles talking about Joseph by those outside the faith. I don’t doubt Kim Marshall’s sincerity. However, for a fun tour of what one can do with photoshop, check out these images of Rowan Atkinson suggesting a lifespan extending centuries.]

Some of the fun things:

Perhaps this is old news to some of you, but I live out east where information of interest to Mormons isn’t broadcast on local TV channels (not that people watch much TV anymore…).