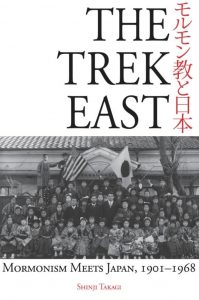 In The Trek East, Dr. Shinji Takagi has produced a masterful treatment of Mormonism’s foundation in Japan. Dr. Takagi takes an approach that informs us of Mormonism in Japan in a manner that focuses on inputs and results, environmental conditions in Japan and cultural biases of a Mormonism informed by western assumptions.

Mormonism arrived in Japan at the first possible opportunity, yet at the worst possible time. Westerners were ignorant regarding Japan and unconscious prejudice against non-whites manifested in scant resources initially devoted to the Japan Mission. Yet the Mormon presence in Japan has blossomed based in no small part on early actions and decisions that contemporary peers felt were misguided.

I am delighted by this book for several personal reasons. First, Brother Takagi was my family’s home teacher when I was a teenager in the DC area. Second, I see this history of the Church in Asia through the lens of being a daughter of the first missionary convert in Taiwan. Finally, my work in recent years has involved significant travel to Japan, so the history and geography described in this book are somewhat familiar to me.

The Trek East is nearly 600 pages long, of which the primary text comprises 440 pages organized into 12 chapters. Each chapter can be read as a stand-alone work. Yet reading the entirety of the work produces a synergistic level of understanding that is not achieved by solely considering chapters in isolation.

Below I give a broad overview of the structure, but I cannot do justice to the gems that are scattered throughout this extensive work. Dr. Takagi’s economic background produces a respectful and rational discussion of the cost individuals pay to accept Mormonism or any new belief system, which ultimately undergirds the growth of any organization of individuals. For example:

The “characteristics of early Mormon converts are consistent with what has been observed in other cultural contexts among various [ideological] traditions… The cost of conversion is expected to be lower for someone who is already a Christian and can therefore use part of the same human capital [already invested in their prior Christian system of belief.]

“[A] younger person is likely to possess a smaller stock of capital… the cost of giving up the current religion… is smaller [and] the benefit of switching to a new religion will be enjoyed over a longer period, making its expected net present value greater.” 1

This informs my understanding of my own history, where my young father and his two siblings embraced the gospel in Taiwan in the late 1950s, prepared by the Christian faith of their mother. Similarly, such “macro” level explanations can help us see our own day, when ideologies such as unbelief and gender-agnostic sexual liberalism are claiming some of our youth.

Chapter 1 is an introduction to both Mormonism and Japan for the student that might be under-informed in either of these two subjects.

For the student familiar with Mormonism, the next chapter to consume would be Chapter 4, which examines the religious and political factors leading up to the Meiji era of Japanese history (1868-1915). It was during the Meiji era that Mormonism first began its engagement with Japan and individuals of Japanese descent. I had not realized that Japan’s pre-Meiji isolation was explicitly due to Japan’s desire to eradicate Christianity. The interplay between incompatible ideologies in Japan is fascinating as we contemplate our modern ideologies which are at least as incompatible as the Shintoism, Buddhism, Confuscianism, and Christianity of pre-20th century Japan.

Chapter 2 discusses two path breakers who became the first Japanese Mormons: the scholar Tomizo Katsunama and the laborer Tokujiro Sato. While many have commented on how “macro” The Trek East is in its approach, this chapter demonstrates Dr. Takagi’s command of the minute details associated with the lives of individuals. Dr. Takagi’s analysis of the family stories regarding Tokujiro Sato is a delight, as the tales told round the family fire are compared to historical fact, making what was vague and personal part of the specific and compelling fabric of the overthrow of the Shoguns by the Meiji government.

Chapter 3 discusses the unprecedented way the press covered the 1901 arrival of Mormons in Japan. Heber J. Grant was interested in spreading the gospel message, providing content. Christian factions in Japan produced stories that were decidedly antagonistic towards the Mormon “Christians.” The non-Japanese enclaves, always hungry for content and primacy, engaged in media wars as they covered the Mormon phenomenon. And Japanese papers used the recently-abandoned Mormon practice of polygyny to explore Japan’s evolution away from sexual slavery and concubinage, which the papers referred to as “domestic Mormonism.” Dr. Takagi acknowledges that the overall tenor of the coverage was negative, but asserts that the net effect of the extensive publicity was nevertheless positive.

The Plant that Withered

Chapter 5 covers the short life of the original Japan Mission (1901-1924). The initial missionaries may have expected to see the kind of results early Mormon apostles realized in Europe, where hundreds flocked to the gospel message preached by a few. In comparison to this expectation, the Japan Mission was seen as a failure. But Dr. Takagi points out that the productivity of individual missionaries was actually relatively high. It was the sparse resources and personnel the Church was able to devote to Japan that were more obviously the “cause” of the poor harvest seen in the first mission in Japan. Furthermore, the Mormon missionaries did not prioritize building leaders amongst the new members. The American Mormons fell into the easy paternalistic pattern of simply providing for the new converts rather than training them to be leaders. When the Church withdrew from Japan in 1924, the local members were not in a position to maintain a robust Church organization.

Chapter 7 examines in more detail the largely unexploited opportunities presented by Taisho Democracy (1912-1926), when industrialization and modernization encouraged the kinds of social mobility that often eases the “opportunity cost” of converting to Mormonism. Though it is possible to see that membership was growing in response to these societal changes, it was advice from those who had been missionaries in Japan during the more stolid Meiji era that informed decision-makers in Salt Lake City.

One of the gems of the initial Japan Mission was production in 1909 of a Japanese translation of the Book of Mormon. Chapter 6 describes how this translation was accomplished and the reasons it was rendered in relatively arcane and formal language with more emphasis on graceful naturalism than literal accuracy.

Chapter 8 describes the way Japanese Mormons forged ahead during the 1924-1944 decades when there was no formal Church presence in Japan. This chapter also addresses how the Mormon message was spreading amongst those of Japanese ancestry in Hawaii and the Continental United States.

Chapter 9 & 10 discuss how the Mormon community grew in the aftermath of World War II, when individual Mormons returned to Japan as part of the US Occupying Forces. The first few years were characterized by “unauthorized” activities where individual servicemen worked to find the Japanese faithful who had been left without official organization in 1924. Though unauthorized, these early efforts featured servicemen working with the Japanese as fellow Saints. The formal establishment of the Japanese Mission in 1948 saw Mormonism benefitting from its associating with the American military presence. Yet formalizing the Church structure led to creation of congregational structures which segregated US Servicemen from Japanese members.

Chapters 11 & 12 discuss the strong foundations the Mormon Church built in Japan from 1948-1968, when the Church worked to develop resources in terms of personal faith and ecclesiastical skill as well as acquire properties. During this timeframe, the number of Mormons in Japan increased to 10,000. As the Japanese economy boomed to become the second largest economy in the world, 1950s-era investments allowed the Church to recapitalize prime real estate to further expand physical infrastructure to accommodate growth of the Mormon Church in Japan. Despite this amazing phenomenon, Dr. Takagi points out how the fertile conditions for the Mormon message that were present in the 1960s could have been more fully nurtured. But those living in that moment could not see as a trained economist and social scientist can do in hindsight. Also, the American Church was still hampered by feelings that Asian peoples were not truly equal as Children of God.

Now I want to say to you mothers, particularly, fathers, too, who have sons in the mission field in any of these Eastern countries—(Well, we have no missionaries in some of these places yet.) If your sons are called to go to the Far East to labor among the Japanese people, the Korean people, the people on these islands of the Far Pacific, do not feel disappointed. Do not feel sorry and wish that they had been appointed to some European country or somewhere within the borders of the United States or the South Pacific. These people in these lands who have joined the Church are just as good as we are. Those people in those Far East countries are human beings, with like feelings and passions. They can love and they can hate just as you and I may love and hate. When they receive the gospel of Jesus Christ, they are just as good as we are.

From the standpoint of the 21st century, it may seem ludicrous that a Church leader would need to give voice to such obvious counsel. Yet the American people in 1955, including all too many Mormons in the Intermountain West, were still not prepared to consider all peoples equal.

There are still cultures whose adherents have yet to embrace the Mormon message in significant numbers. Bigotry in its various forms has not been fully eradicated from American culture or even amongst those Mormons living in that American culture. By studying the interaction between Japan and Mormonism, we can gain profound insight into how to nurture our own seeds of truth as we move towards the future.

Dr. Takagi is a specialist in international monetary economics and holds a Ph.D. in economics from the University of Rochester. Dr. Takagi is the author or coauthor of over 160 publications, including an undergraduate textbook that has sold 30,000 copies in the Japanese academic market. Dr. Takagi began his career as an economist at the International Monetary Fund, subsequently working at the Bank of Japan and the Japanese Ministry of Finance. Dr. Takagi spent more than 20 years at Osaka University, where he is now Professor Emeritus. During 2002-06 Mr. Takagi was an Advisor at the Independent Evaluation Office of the IMF. In 2013 Dr. Takagi rejoined the IEO where he now serves as Assistant Director. Dr. Takagi lives in Northern Virginia with his wife, the former Sue Lynn Bergmark of Rochester, NY.