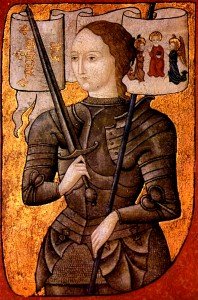 She is one of the greatest women in history, with the most documentation of any Medieval personality, but perhaps the least understood. Secularists can’t deny her importance to history, but have a hard time evaluating the spiritual claims. The miracles attributed to her gave her the status of Saint after a lengthy trial ending in burning as an heretic. France has given her a hero’s honor for saving the nation, but even past enemies celebrate the strength and convictions of an unlikely leader. It is no wonder that BYU picked Joan of Arc for the recent annual holiday spiritual docudrama series.

Unlike the offerings in the past, the story of Joan of Arc is much more epic. It covers what is known as 100 years war between two powerful nations. There is a lot of history and territory to cover for a small production. For the most part the docudrama succeeds as a primer, explaining how events in the past contributed to England taking over most of France. Anyone who wants to learn a more detailed historical context will be disappointed. Hints of a more complex narrative are dropped throughout the story. As an example, it never explains how a young girl from the bottom of society could be the fulfilment of prophecy. What the prophecy is or how she fits in was quietly passed over without comment. Despite a lack of the deeper contextualization, the narration has a logical flow that allows those less familiar with the history to follow along.

Very few times did the production give the feeling it was a low budget docudrama made by a private religious university. The costumes were amazingly accurate looking, and gave the impression they could be used in life. Having the ability to film at actual locations added another layer of realism usually reserved for big budget movies. A few limitations were noticeable. By filming at the locations it at times became obvious that the structures were past their pristine conditions. Camera angles sought to hide the poor condition of buildings without complete success. Another problem was the terrible fight scene choreography that never gave the impression anyone was in danger. It isn’t just trying to remain family friendly within a story about war. The actors were halting, marks not always met, and generally the performances of the extras stiff. Despite the nitpick flaws, nothing was bad enough to take a viewer outside the presentation.

Probably the main criticism for the docudrama was language choices. Because these events happened in France, logic dictates that the people would speak the French language. Indeed, there were times the actors did use French to communicate with each other when voice over narration superseded the dialogue. The majority of the time dialogue was given in good English with some actors having slight natural accents. This took away from the authenticity more than any of the smaller problems. It would have been better to do the drama portion in French with English subtitles, and still have the main narration in English to make things easier. The choice to not use French in much of the dramatization is understandable. It reduces the acting pool to pick from and the audience culture is averse to reading what they can otherwise hear. Still, it would have been a nice addition to give another layer of believability.

The actress Milly Thomas who plays Joan of Arc did a powerful and honorable portrayal. Unlike so many others who have done the part, she makes the character neither too holy or on the verge of insanity. The audience can see her as a true leader with strength of conviction. Like other actresses who have taken up the part, however, her looking the right age is problematic. That is probably unavoidable considering the complexity of the real person. Thomas has screen presence that is intimidating when the dialogue calls for confrontation and giving commands. She is equally good at showing fear and vulnerability while not losing her charismatic disposition.

Ultimately, the BYU docudrama is about the spiritual life of a peasant girl that changes the course of history. For the Mormon perspective that is weaved throughout the presentation, this is not a new story. She comes off seeming one part prophet warrior Mormon and another Joseph Smith the visionary. The way miracles are treated, particularly as explained by Elder Holland, is refreshingly without cynicism. Her angelic visitations end up in this docudrama almost proto-First Vision experiences. The visual portrayal of the Angel Michael is similar to other Mormon representations with white clothing and a bright hue around the figure. On the other hand the meaning of her visions, such as why she needed a particular sword hidden in a church or the personally designed flag, is never explored.

Because of the less cynical presentation, serious historical disagreements are ignored. Almost everything is presented as matter of fact, despite a few comments that point toward controversies. This is particularly the case when discussing the final months of her life. Did she really recant her testimony at least once to save her life out of fear or was it a trick? Was her women’s clothing stolen or did she return to her rebellion against the captives? Did she die a comprehending martyr, or a scared and confused girl who didn’t fully understand her fate? Was her more detailed descriptions near the end of her trial a desperate gamble to prove the reality of the visions (while ironically used against her) or a breaking of her will enough to discuss what she held sacred? These are never brought up when the majority of treatments ask and sometimes try to answer them.

Finally, while the spiritual side of Joan of Arc is taken more seriously than almost any other documentary, the biggest consiquences remained unexplored. The writer, director and producer Russell Holt had this to say in a Daily Herald interview:

“When Joan came along in the early 1400s, France was on the verge of being dissolved as a nation at the end of the Hundred Years’ War,” Holt said. “Because of Joan of Arc, France was saved from that fate. Because the independent nation of France was allowed to continue to grow and prosper, a decisive battle of George Washington (in the American Revolutionary War) was turned by the French. It’s widely recognized by historians that Washington may not have won that war (without French assistance). So, yes, the fact that we live in America today and enjoy the freedoms we do can be traced back to Joan of Arc.”

That perspective never made it into the final production. All the audience learns is that 20 years later France pushes England out of the country to become its own nation once again. There is no discussion, other than as a role model, why a Latter-day Saint living in the 21st Century should care about a peasant girl with visions who saved a foreign country 600 years ago. Nevertheless, there is enough material that was included in the docudrama to perhaps wet the appetite for more information. Even the highly American and atheistic Mark Twain found her fascinating without resorting to his usual sarcastic wit. For those Mormons who already find her story highly praiseworthy, there is hope this docudrama will open up more discussion about her spiritual importance.

12 thoughts on “Review of BYU Joan of Arc Docudrama”