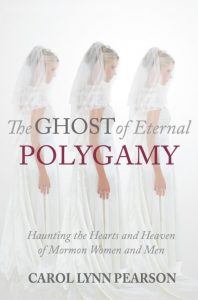 Carol Lynn Pearson, who describes herself as one of the “wise-woman elders” of Mormonism, has written a book documenting how the specter of eternal polygamy pains those who have embraced Mormonism.

For many Mormons as old as me, Carol Lynn Pearson was *the* Mormon poet. Her poetic voice was clear and inspiring in the initial books of her poetry, widely quoted in Mormon circles. Her life appeared to be unusually graced until her beloved husband came out as gay. Pearson’s book about her husband was published in 1986, after her former husband died from complications related to AIDS.

Pearson started as precocious and innocent girl believing the promises of 1970s Mormonism and has arrived at the status of elderly and wounded woman, crying out to God and us listeners with her stories of how entitled polygamous patriarchy harms everyone, but particularly the female members of the Mormon tribe.

As a reviewer, I am simultaneously irritated with Pearson while applauding her clarity in pointing out the damage stupid beliefs about eternal polygamy can cause.

I am irritated because she sees Mormon plural marriage through a lens I no longer see as valid, a lens through which she describes Joseph Smith “taking” 30-40 wives, including some with legal husbands and at least one as young as fourteen. I would have rendered that phrase that Joseph Smith covenanted with ~40 women, including some with legal husbands and one woman who may have been as young as thirteen. But I would have pointed out that in every case that has been examined, the few children borne by these women during this time have been positively confirmed to be the biological children of the legal husband (with no confident reports that any otherwise unmarried women conceived at all). And I point out the vast sexual heresy that engulfed Nauvoo in 1841-1842, to which I posit Joseph was responding to by entering into covenants with associated teachings, covenants that appear to have been asexual for the most part.

Yet I applaud Pearson because the pain she describes is the very reason why I feel it is so critical to unearth the forgotten sins of our past, the truths it appears our pioneer forebears had righteously buried in full repentance before their Lord, Jesus Christ.

Pearson begins with a delightful passage describing her beginning at writing this book. Her magnolia tree is in full bloom, and her writing desk looks out from an upper story window, giving her the impression she is writing in a tree house. Pearson embraces all, yet is particularly delighted by her tribe, her Mormons. Though her tribe contributes little to the horrific statistics of world-wide abuse of women, there is still this pocket of pain. Pearson wrote of how she set about to document the stories and statistics related to Mormon feelings about marriages that would be polygamous after death in the wake of the 2014 media storm about the Church History essays on LDS.org.

Pearson next describes the instance when she learned about plural marriage in eternity, from a Seminary teacher who was a remarried widower. He had testified to his students that he would be able to be with both his beloved wives in eternity, and bore witness that such marriage was acceptable and even preferred by God. She grew up in a day when polyamory wasn’t a household term, when people dreamed of being together forever with their one true love, a day informed by Disney princess stories of happily ever after and monogamous domestic bliss.

As a maturing student, Pearson wondered why maleness seemed so much better than femaleness. She wrote an essay about eternal polygamous marriage under the writing prompt “A Fate Worse than Death.” When her professor attempted to point out the compassion of a God who would allow a man to be with both women he had loved in life, Pearson asked why a woman couldn’t be with both men she might have loved in life.

Pearson’s book is informed by her conviction that “the Ghost of Eternal Polygamy exists today from error, that plural marriage never was–is not now–and never will be ordained of God.”

Pearson sees things through the lens of women who love their husbands and dread being required to share that husband with another woman in eternity. [She does not appear to consider the corollary, the man who gets to Final Judgment only to have God and his wife look at him in disdain and say “nope.”]

For the rest of the book, Pearson alternates her chapters with chapters composed of stories from others, women and men she heard from when she performed her survey of admittedly self-selected respondents. She eloquently displays to us the pain the current version of history causes for many who do (or have) believed. There are enamored brides who fear the supposed requirement to embrace other women as sister-wives in eternity. There are righteous widows who are rejected by never-married men because these men wish a woman they can have in eternity. There are children destined to be united in eternity to a man who died long before they were conceived. And the stories, painfully honest, roll on.

Yet to me, as a woman who has imagined Celestial marriage being restored without the accommodation of plural marriage, Pearson does not seem to consider the alternative history we would have had if Joseph Smith had not covenanted with at least one plural wife. The pain some feel today seems nothing to the millions who would have been denied any ability to be sealed to their mortal husband or father.

Pearson does not seem to consider the possibility that Emma was as informed and accepting as described in 1860 by a then RLDS Whitehead, who had witnessed several of the covenant ceremonies where Emma participated in helping her husband be eternally united to other women. Pearson, like so many others, presumes that Emma’s reactions were rejections of plural marriage, rather than seeing that Emma’s reactions (at least in the 1840s) were correlated with direct threats to Joseph’s life rather than plural marriage itself.

Pearson seems willing to erase doctrine to achieve rest for herself and others on this topic. I prefer to retain core doctrines while challenging erroneous history and false beliefs.

Ultimately, I recommend Pearson’s book to anyone who thinks there is no reason to challenge the status quo regarding the history of polygamy. The pain Pearson documents is real and honest. It is a pain that arises from the idea that Joseph Smith righteously bedded dozens of women without the concurrence or knowledge of his beloved Emma, with modern Mormons supposedly assured that there will be so few righteous men in heaven that the good women who arrive there will need to cast themselves on the righteous few by the handfuls to assure each righteous woman of Celestial Marriage.

As for me, I look forward to an eternity in the vicinity of all my children from my marriages, with the hope that I and my dear husband will mutually wish to spend eternity together, with God’s approbation. Ultimately, I echo in paraphrase what my ancestor said on her deathbed to the man who had been her earthly partner for the decades since Joseph Smith’s death, “God will do what is right.”