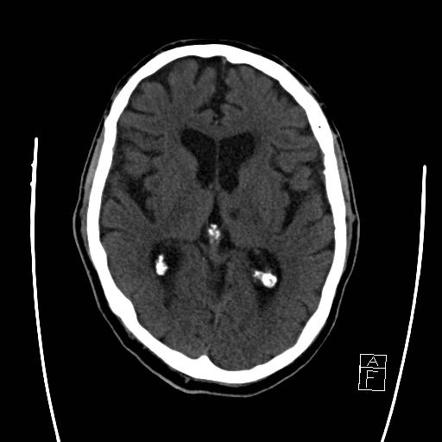 A few months ago I posted about Riley, a relative I am seeking to protect.

Earlier this week Riley drove from the east coast to a western state without stopping. After at least one encounter with highway troopers, Riley eventually drove off the road into a highway median, then left their car and walked into the traffic lanes of the interstate. Riley was pulled from the road by a concerned passerby, to whom Riley’s friends and family owe a great debt of gratitude.

In two ER visits since then, Riley has been given a diagnosis of dementia, complete with pretty pictures of Riley’s brain showing evidence of the silent stroke that likely occurred in 2015. Apparently silent strokes occur 14 times more often than the strokes that manifest as physical weakness such as slurred speech. While there is no obvious outward manifestation of a silent stroke, a silent stroke can damage the portion of the brain related to impulse control, judgement, and mood regulation.

As various health problems, such as silent stroke, are associated with aging, we see one reason some are nervous about the advanced age of most Church leaders, given that death by assassination and apostasy no longer keeps the average age of the leadership relatively low. 1

Yet as I am observing in the case of Riley, it is possible for a person to continue to function with dignity when surrounded by loving friends and family. The Bible gives us the analogy, telling us of a time Noah was impaired. One group mocked him, inviting others to see the drunken nakedness of their leader. The other group covered his nakedness and allowed him to sleep off the inebriation in peace.

If the Church were led by a Q1 (as in the case of Riley with their own estate and person), I would agree there could be concern. But the Church is led by a Q15, making it unlikely that failure of any single individual could derail the Church.

But it is not the ravages of old age on Church leaders that causes most to lose faith. It is a belief that Church leadership at some point became traitors to the cause of Christ. We see this with Snuffer and his followers. For many of those losing faith over “polygamy,” their concern is that Joseph allowed carnal desire to overcome his devotion to God’s path.

I live in DC and have some experience with traitors.

One was an IT specialist from a few decades ago, a very helpful and personable young man. But then NCIS debriefed us on the fact that this friendly IT specialist had been selling secrets to a foreign power. In a moment, all the friendly good feeling I had felt towards this individual was replaced with a new set of feelings. Every kind moment was reframed as a traitor’s calculated actions to gain access to secrets.

Another was horror from a distance. A co-worker lived in Vienna, VA, and had a teenage daughter. One weekend the daughter was to have a sleep-over at the home of a new friend. The sleep-over was cancelled when the friend’s father failed to arrive at home. The father was Aldrich Hazen Ames, a CIA operative who was discovered to be a KGB mole.

Belief that a former friend or hero was a traitor can instantly transform one’s perception.

There are those who are very upset with my writings about Joseph Smith and plural marriage. They are typically those who have determined that Joseph was God’s prophet, no matter what he might have done. Therefore they do not understand why people would consider Joseph a traitor.

These folks think it is sufficient to point out that Joseph’s actions weren’t quite as black as portrayed by the meanest tweets.

I assert that to ensure Joseph is not perceived as traitor, we need to understand the heroic battle he was waging against sin. Fortunately, Joseph’s battle with sin redeemed many souls, and these individuals went on to become valiant leaders in the LDS faith.

But you cannot properly understand a conflict by only allowing information about the unredeemed sinners. Without understanding the peril to the innocent and repentant, Joseph’s actions appear unjustifiable, erratic, and demented.

I likewise find LDS leaders since Joseph and Brigham to have been guided by God.

But as we consider our loved ones who have lost faith, it is useful to understand the fundamental shift in worldview that they have experienced. They are as one who has become convinced that a nourishing meal is riddled with bacteria and insects. In their minds, they are right.

In the fictional world of Harry Potter, there was one that was long believed to be evil, Severus Snape. Yet at Snape’s death, it was discovered that he had been on the side of good the entire time. He became the anti-traitor, arguably becoming the most heroic figure of that entire fictional world.

It is not enough to merely suggest that Joseph’s covenants with women other than Emma weren’t quite as bad as popularly portrayed. We need to fundamentally overturn the narrative that portrays Joseph as a traitor to God’s cause. We who are faithful need to plumb the original documents to find the heroic Joseph whose whole aim was to bring mankind to God through repentance and saving ordinances.

If we cannot enthusiastically proclaim the goodness and honesty of Joseph along with Agnes Coolbrith, then we do not truly know Joseph.

5 thoughts on “On Dementia And Traitors”