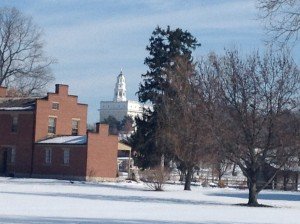 Nearly 170 years ago those who believed in the Church of Jesus Christ were directed to evacuate Nauvoo, their City Beautiful. Their two leaders, Joseph and Hyrum Smith, had been killed while in the protection of the state militia. The state had removed legal protections by revoking the Nauvoo City Charter, and the surrounding community had burned Mormon homes and killed Mormon adherents.

In the ceremony held this past Saturday to commemorate the flight of the Saints from Nauvoo, starting February 4, 1846, this failure of the United States to protect the rights of her citizens was discussed. But we also spoke of how we now enjoy full rights and protection before the law. And in this vein, we pledged allegiance to the flag of that government which has sustained us in our freedoms.

This month there has been a bit of fuss over some dissidents. Are they brave? Are they not?

Here is my question. Can you remember the dissidents of yesteryear?

Can you remember the names and stories of the folks who betrayed Joseph Smith to his death (unsuccessfully in Missouri, successfully in Illinois)? [No fair googling my blog posts if you can’t quite bring these names to mind.]

If you cannot remember the names of the apostates who wanted Joseph Smith dead in a time when the Saints were threatened with death, why would any of you imagine the names of apostates who run tattling to world newspapers would be remembered by popular history?

I don’t know why I felt it was so important to get to Nauvoo this past weekend. Certainly the chance to participate in the Untold Stories Symposium was fun. But I felt there was more than just that prompting me to travel to Illinois.

On Saturday we went to the temple. I had the chance to perform the proxy ordinances for Caroline Spearspoint, born near London circa 1880. Afterwards I began chatting with one of the lovely ladies serving in the temple. As I began telling her about my research into what had been happening in Nauvoo, her face lit up.

“Are you the woman who was in that article in Meridian Magazine? I read the first part, but I’m busy with the work here and never saw the second part.”

We spoke more, and I shared with her in that venue things I haven’t (and likely won’t) share on the internet. I can imagine God sending me a thousand miles to help a good sister know things her temple service time commitment had prevented her from following up on. Her heart was eased, and it seems as though she will now be able in turn to ease the hearts of others who have expressed their concerns.

Saturday evening we stopped by in hopes of visiting with a former ward member who now lives in Nauvoo. Her husband is often away from home, and she is therefore alone as so many of the women were in the 1840s, caring for her children, often (in the winter) unable to leave home because someone has a fever. English is not her first language, and the friends she has made in the city, in the shadow of the temple, are content to keep their distance during this time of family illness. As we spoke to her, she related that it had been six weeks since she’d had a chance to interact with other adults.

We talked about the gerbils we bought from them when they moved away from DC, accepted the delightful hand-made paper puppets her young daughter made, marveled at how tall her sons had grown, and waved across the room to her youngest, who is the one currently down with a high fever.

We finally bid our farewells, glad to have had a chance to spend time with this sister who we love, who had been so lonely for the past many weeks.

My God is a God of such miracles. They are the light touches of sweetness that help us know that we are loved, both by God Himself and by our brothers and sisters throughout the world.

I am sorry that certain modern folks have decided to set themselves against the Church. I hope they, like William W. Phelps and Orson Hyde will realize their error and return. But even if they spend the rest of their lives kicking against the pricks, I can still hope that at some future time they will humble themselves and embrace that God and truth they are currently so eager to damn in the eyes of the world.

In the meantime, I and mine will enjoy the sweet moments that come from our participation in the life of the Gospel.

28 thoughts on “Of Apostates and History”