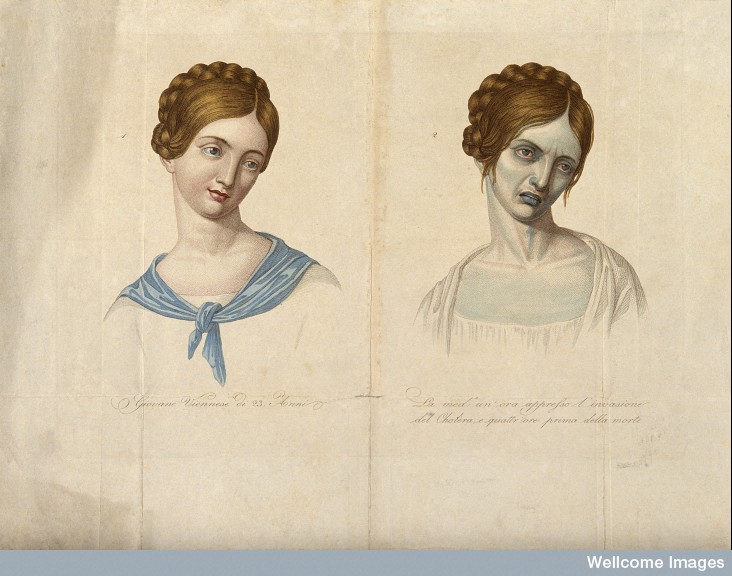 A young Venetian woman, aged 23, depicted circa 1831 before contracting cholera and a quarter hour before her death. Coloured stipple engraving. Courtesy of Wellcome Library

For decades most people were satisfied with their certainty that this ailment was caused by sin. If you were sick, it was your fault. 1 We know better now, or so we tell ourselves. But do we still have a legacy of believing that anyone who is suffering must secretly be deserving of their pain?

I have recently had the privilege of helping a few folks who are struggling to make ends meet. One of these individuals was wrongfully arrested 2 and became extremely ill because of the physical interactions that occurred while in custody. Then they became homeless.

In those first terrifying months, no hand of assistance was offered, even though help was requested. 3

Why Don’t We Help?

But do we look at those less fortunate that ourselves and presume that they must deserve to be poor or crippled? Do we withhold assistance, lest we thwart that which we presume to be the just punishment of an angry God?

The recent change to how we care for one another gives us a great chance to be God’s hands. Let us embrace those within our circle of care: family members, those assigned to our watch-care, friends.

We don’t have to solve all the problems of the world. But we can be there to comfort and bless those in our circle. We can see them as fully worthy of comfort and support, rather than secret sinners somehow deserving of their trials.

May we be those who reach out to feed and shelter and comfort and clothe and visit those in need among us. It is to such individuals that Jesus promised, “Come, ye blessed of my Father, inherit the kingdom prepared for you from the foundation of the world”. 4

The Works of God, Manifest

The gospel of John tells of an instance when even the disciples of Jesus presumed misfortune was caused by sin. Jesus and his disciples had just left the temple, when:

Jesus passed by… a man which was blind from his birth.

And his disciples asked him, saying, Master, who did sin, this man, or his parents, that he was born blind?

Neither hath this man sinned, nor his parents: but that the works of God should be made manifest in him. 5

Moroni, speaking of our day, decried any who would turn their backs on the needy:

Why do ye adorn yourselves with that which hath no life, and yet suffer the hungry, and the needy, and the naked, and the sick and the afflicted to pass by you, and notice them not? 6

Let us search our hearts and seek to become those in whom the works of God are manifest, seeing all as our brothers and sisters, as worthy of salvation in both spiritual and temporal matters.

7 thoughts on “Obey and Prosper?”