It all started because I decided to watch Al Gore’s An Inconvenient Truth. I said to my wife, “we should watch Gore’s movie because everyone is talking about it and it won all these awards and I want to know what it’s all about.”

Then I quickly added, “I have my doubts global warming is a real problem, but who knows. Let’s see what he has to say.”

The movie was better than I expected, though it still basically stunk like a snunk in need of a bath. I felt like it was two hours of watching good-ole-Al stand in front of people and give a Power Point presentation inter-cut with somewhat better shots of him traveling around the world while intoning sage advice. I was particularly glad that he only included 10 or so potshots at “the current administration.” Considering how sore Gore was over losing the presidency to George W. Bush, and considering how popular Bush-Bashing later became, this really wasn’t that bad and probably to be expected.

In particular, I was impressed with one memorable piece of evidence Gore presented: a graph showing relationship between CO2 emissions and average global temperature. I found out later that the temperature portion of this graph is known as the “hockey stick” graph. Gore did a good job of explaining how ice core samples can be used to determine the levels of CO2 centuries back. Likewise, through studying width of tree rings, scientists can determine temperatures centuries back. By correlating both of these data, we can recreate the correlation between CO2 and global temperature.

After the movie was over, I was still feeling mighty skeptical. I really wanted to hear “the other side of the story.” I had remembered Orson Scott Card writing an article bashing on global warming zealots, so I wrote to Brother Card and asked him about the hockey stick graph. He was kind enough to respond to me and sent me a link to a movie called The Great Global Warming Swindle which I watched with rapt attention.

It turns out that the hockey stick graph isn’t as convincing as Mr. Gore made it out to be. If I remember correctly, Gore said something like “one thing that jumps out at you is… do they seem to fit together?!” He then showed how the temperature and the CO2 emissions follow the same up and down pattern almost perfectly. Then, with a flourish, Gore revealed the final few years of CO2 levels and we see a huge spike in CO2.

We are left with the impression that we’ll see an equal spike in global temperature and that it’s going to be very bad. 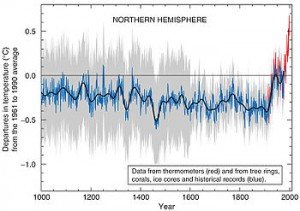 But just as I was about to conclude that Al was full of baloney and, by induction, so was the whole global warming enthusiast community, my natural skepticism kicked in again.

I quickly discovered that The Great Global Warming Swindle was not exactly a movie to be trusted either. Through out of context quotes, they had manufactured the illusion of evidence to make their case. I was particularly disturbed that two of the scientists interviewed has lodged complaints that they had been taken out of context. Take, for example, this quote from Carl Wunsch, one of the interviewed scientists.

In the part of The Great Climate Change Swindle where I am describing the fact that the ocean tends to expel carbon dioxide where it is warm, and to absorb it where it is cold, my intent was to explain that warming the ocean could be dangerous—because it is such a gigantic reservoir of carbon. By its placement in the film, it appears that I am saying that since carbon dioxide exists in the ocean in such large quantities, human influence must not be very important—diametrically opposite to the point I was making—which is that global warming is both real and threatening.

My forehead was red from all the slapping! Who could I trust? I didn’t want to have to earn a PhD in climate modeling before making a decision over whom to politically support! This was beyond ridiculous. As far as I was concerned, both sides were being overtly dishonest and I couldn’t trust either.

Frustrated out of my mind, I started Googling looking for sites about global warming.  I quickly came across several, all of which were polemics for one of the two sides.

One of the claims in The Great Global Warming Swindle had been that water vapor was a much more important greenhouse gas than CO2, apparently by a considerable factor. I had heard this claim multiple times before talking to skeptical friends about global warming. This quote is probably typical of how I’ve heard this argument presented by global warming deniers.

Contrary to what is said in the popular media, water (H2O) is the most important greenhouse gas in Earth’s atmosphere, not the small amount of demonized CO2.” (link)

I’ve also heard bantered about that water vapor makes up 95 to 95% of the greenhouse gas effect:

Water vapour is the most important greenhouse gas. This is part of the difficulty with the public and the media in understanding that 95% of greenhouse gases are water vapour. (link)

So, as the argument goes, how could CO2 play any significant role? [1]

So I tried Googling about this new point, wondering how the Anthropogenic Global Warming (AGW) Believers would respond. Within minutes I had the answer. It turns out that this is a false dichotomy. Global Warming models already do include water vapor.

There is believed  to be (according to their climate models) a catalyst effect. CO2 goes into the air, causing a bit of additional warming. But now that the temperature is slightly higher, the air can take some additional water vapor right at the very moment a bit water more is evaporating. This in turn (or so says the model anyhow) raises the temperature even more. As the temperature rises, this causes the ocean to start releasing CO2, just as Carl Wunsch explained above. This cycle repeats until you end up with a much warmer earth. The fact that usually CO2 follows global warmth doesn’t save you here. A small increase in temperature may lead to a larger increase in water vapor resulting into a self-destructive cycle.

To see an example of the catalyst argument, see this article. In addition, there is an issue where water vapor is seasonal and CO2 is not, so CO2 will (according to the AGW Believers), have a longer term impact. (This article is an example of this argument.) To use an analogy, we would generally think of a swimming pool as consuming more water than a leaky faucet. But what if you let that faucet leak for years?

Now it turns out there is still controversy over this counter argument. Consider, for example, this article called “Climate Models Blown Away By Water Vapor.” It sums its point up as the following:

If something as seemingly simple as water vapor can have such complex and bewildering impacts on Earth’s climate why does the IPCC and the climate crisis crowd continue to insist that all fault lies with CO2?

Still, I am deeply bothered by the fact that Global Warming Deniers routinely use and reuse the simplistic argument that water vapor is a bigger greenhouse gas than CO2 without additional explanation. The Anthropogenic Global Warming Believers have never made the argument that CO2 is a more significant greenhouse gas than water vapor, so this isn’t a contest between CO2 and Water Vapor. False arguments like this make Anthropogenic Global Warming Deniers look bad. Indeed, it makes them look dishonest.

Now that I knew the simple Water Vapor vs. CO2 argument was a fraud, I knew I could ignore any site that tried to use this argument because I knew for certain that the author was not making a sincere effort to understand the problem being discussed. (Note that this is a significant strike against The Great Global Warming Swindle movie since they made the water vapor vs. CO2 argument, intentionally misleading viewers.)

Furthermore, take a close look at that last quote. Does it actually address the AGW Believers fear of a CO2 / Water Vapor feedback loop? Is this addressed in the article? The article’s main point (as summarized in the quote) is merely that we don’t understand the atmosphere well enough to model it! I’ll come back to that point later, as it’s a more valid objection. But it leaves me uneasy that this otherwise well put together article never even addresses the argument it’s supposed to be countering.

In my next post, I’ll continue the story of my frustrating attempts to make sense of AGW.

[1] …how could CO2 play any significant role? In reality, that 95% number is not agreed upon and you only hear it from those that are professed global warming skeptics.