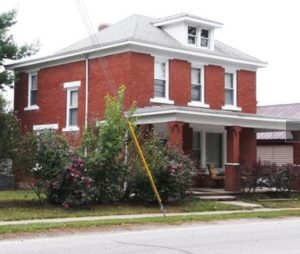 Nauvoo has long captivated me. But it wasn’t until 2015 that I decided I wanted to move there someday.

As of this week I am the delighted owner of a brick home on Mulholland Street, within easy walking distance of the Nauvoo temple and all the businesses in town.

The home has curb appeal and the “built in 1850” note suggested historical significance. It’s been fun tracing the history of the original families to build the home as it now is. And in what was a family living in a mostly Catholic Nauvoo, I found an unexpected tie to Mormonism.

When visiting the house this past fall, I asked what the realtor might know of the former inhabitants. She didn’t know anything.

But in an upstairs room I noticed a framed montage. 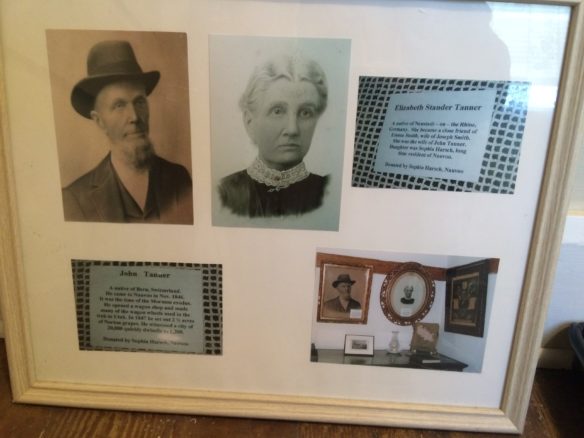 Getting on the internet, I found additional documentation regarding both the home and the adjacent shop. The original builder was one John Tanner, a Swiss-born man who arrived in Nauvoo as the Mormons were preparing to flee Nauvoo. 1

Members of the Tanner family lived in the home until 1963. Though Elizabeth Tanner had been a close friend of Joseph Smith’s widow, Emma Smith Bidamon, a quick glance at Family Search indicated the Tanners had never been Mormons.

The home eventually went to the Tanner’s only surviving daughter, Sophia, who had married Tanner’s young business partner, Henry Harsch. Sophia would live in the home until 1963, passing away just before her 100th birthday.

The Relief Society Gatherings of Nauvoo

As I researched Sophia Harsch, I was surprised to find the following letter in the Relief Society Magazine:

I am very happy and thankful that Mrs. Elizabeth Hogan is sending The Relief Society Magazine to me. I surely appreciate her kindness. I love to attend Relief Society meetings. We are snowbound — had no meeting tonight (March 9, 1960). I live in Nauvoo, Illinois. My dear mother was a friend of Emma Smith, wife of the Prophet Joseph Smith. I am ninety-six years old and have spent many pleasant hours reading the Magazine. The story “A Is for Apron” (August, September, and October 1959, by Ilene H. Kingsbury) touched my heart. Many thanks for the good Magazine.

Had Sophia been Mormon? A return to Family Search showed that Sophia hadn’t been baptized during her lifetime, though proxy ordinances were performed for Sophia and her husband shortly after her passing.

Next I turned to the mysterious “Mrs. Hogan.” Was she someone in Salt Lake? Perhaps she was a missionary serving in the Nauvoo area.

But the only likely Elizabeth Hogan appears to have been Mary Elizabeth Doolittle Hogan. Mrs. Hogan lived in Niota, Illinois, less than 10 miles from Nauvoo and just across the Mississippi from Fort Madison, Iowa. Elizabeth Hogan’s husband had grown up in Nauvoo with Sophia. From all evidence, Elizabeth Hogan was a staunch Catholic lady, mother to six children.

Yet Elizabeth Hogan had subscribed to the Relief Society Magazine and was sending a copy to her long-time friend and fellow widow, Sophia. A group of women in the Nauvoo area would meet together on Wednesday nights, considering these meetings to be part of the Relief Society tradition that had begun in Nauvoo on Thursday, March 17, 1842. It seems possible that this Nauvoo Relief Society tradition had continued after Brigham Young left Nauvoo, as Emma gathered with new friends who came to Nauvoo after 1846.

But on March 9, 1960, a heavy snow prevented the ladies in the Nauvoo area from meeting. So Sophia Harsch took the time she usually would have spent with her Nauvoo Relief Society group to write a note of thanks to the Utah folks who published a Relief Society Magazine.

In my own life I get to participate with a small group of Relief Society sisters who meet for book group, scripture study, and knitting, groups that continued from an alternate approach to what had been “Homemaking Meetings” back in the day. These groups also include neighbors and friends who aren’t formally members of the Church or Relief Society. But they are our friends and part of our gatherings. We gather and talk, sometimes literally knitting, other times talking about our loved ones and triumphs, as well as loss of loved ones and trials. And through it all our lives become knit together.

In my own community of friends, then, I see a pattern for Nauvoo’s 1960 “Relief Society,” a gathering of women as friends, inspired by Emma Smith’s Relief Society but without any necessary tie to the LDS Church.

On the off-chance that you are interested in the additional information I learned, click to read more.

Swiss-born John Tanner came to Nauvoo in the last year of Mormon settlement to help build wagons. According to Tanner’s daughter, John Tanner set out 2 1/2 acres of Norton grapes in 1847, making him one of the first of those who would make Nauvoo famous for its grapes and wines.

In 1848 John Tanner married Elizabeth Stauder, a young German woman who had been born in Neustadt on the Rhine.

The 1840s were a time of civil unrest in Europe. Two groups who fled Europe in the 1840s for a better life in America would eventually gather to Nauvoo. Both of these groups had lived in Texas in locations where Lyman Wight’s Mormon followers had lived.

Frenchman Étienne Cabet promoted the idea of a non-religious communitarian ideal and at one time claimed 50,000 dedicated to his views. They called themselves Icarians after the fictional land of Icaria featured in Cabet’s novelistic utopian treatise. A small advance group of Icarians attempted settle in Texas, but soon faced death as they tried to homestead bizarrely divided undeveloped plots. The Icarian plots near the Red River were in a county adjacent to where Lyman Wight had initially settled in Texas.

Germans also came to Texas, fleeing the troubles of Europe. The Adelsverein was a German organization founded in Biebrich on the Rhine, focused on establishing a New Germany in Texas through organized mass emigration. The hope for a large German settlement in North America was soon confronted by the reality of inadequate funds, miserable living conditions, and fatal illnesses. In the summer of 1847 an attempted coup d’état divided the community. While a significant percentage of the hundreds of Adelsverein emigrants remained in Texas, many families either returned to Germany or moved elsewhere.

The prospect of Nauvoo, a deserted town on a major waterway, appealed to both Icarians and the discontented Adelsverein. Because the partial Adelsverein diaspora from Texas was more diverse than the Icarian departure from Texas, it has not been featured in the stories told about Nauvoo. Yet it seems likely Elizabeth Stauder and other Germans who gathered to Nauvoo in the late 1840s were among the Adelsverein who left Texas after the disastrous summer of 1847.

By 1849 the Tanners welcomed their first child. Whatever structure had served as home before was no longer adequate. So John constructed a brick home, built on a foundation of the large white stones that remained after the elements had destroyed the Nauvoo temple. The windows for both the brick home and Tanner’s adjacent workshop were styled after the windows in the Red Brick Store, with large white window sills and lintels carved from the same stone that had been used for the Nauvoo temple. 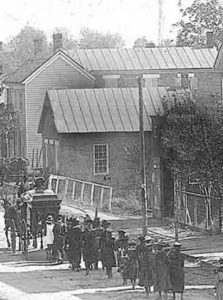 At some point the Tanners expanded their home by adding a clapboard addition facing the street. This may have been done very soon after initial construction, as the cellar walls that supported the clapboard addition feature large temple stones. It is possible and even likely the cellar was used to store wine produced from the grapes John Tanner had introduced to Nauvoo.

The Tanners welcomed at least six children into their family. 2 Four of their children died prematurely. It was likely in the crucible of these losses that Elizabeth became close friends with Emma Smith Bidamon, widow of Joseph Smith.

In 1896 the Tanner’s only surviving daughter, Sophia, married John Tanner’s young partner, Henry Harsch. The Tanner and Harsch couples lived in the brick and clapboard home Tanner had built, a home with no electricity or indoor plumbing. The men would spend their days in the adjacent shop making wagons and working on cultivating grapes. The women tended to more domestic tasks, such as woolen yarn production. But the time of shared co-housing ended when Elizabeth and John passed away in 1906 and 1908.

By 1910 the carding and spinning that was a primary home industry for American women in the 1800s had been overtaken by mechanical devices. Wagons were being replaced by automobiles. Electricity and indoor plumbing transformed the nature of domestic life. And new home construction materials had an answer to the fear of fire that had been stoked by the Great Chicago Fire of 1871 and the San Francisco Fire of 1906.

Henry and Sophia Harsch decided to remodel their home, transforming it from the “primitive” brick and clapboard structure into a modern home with indoor plumbing and electricity. They were likely inspired by the Hamilton, the more elaborate of two Frank Lloyd Wright-inspired Prairie Box or Foursquare designs in the 1908 Sears catalog. Parts and labor for Sears Modern Homes (1908-1940) cost a fraction of the materials and labor required previously. In addition to facilitating modern plumbing and electricity, the Sears homes featured fire-retardant features like dry wall and asphalt shingles. The Sears Modern Home program encouraged homeowners to adapt the designs as needed. All materials and fittings were then pre-cut and shipped to the buyer in a boxcar. The Harsch family chose to make their renovation brick rather than clapboard and retained the distinctive window design that had been based on the Red Brick Store.

It’s possible Henry Harsch intended his Mulholland Street residence to be a showcase to inspire others, transforming his business from that of wagon maker to general contractor. By 1920 the census lists Henry as proprietor of a repair shop, rather than as the fruit farmer or wagon maker he’d been listed as previously. When Henry Harsch upgraded his home in 1910, it was one of the finest homes in town, surpassed only by the home belonging to the town’s banker. 3

Henry Harsch and Sophia had no children. and Henry would only get to live in their new “modern” home until 1925, when he passed away at the relatively young age of 62. Sophia would live in the home alone for nearly forty years following her husband’s death. 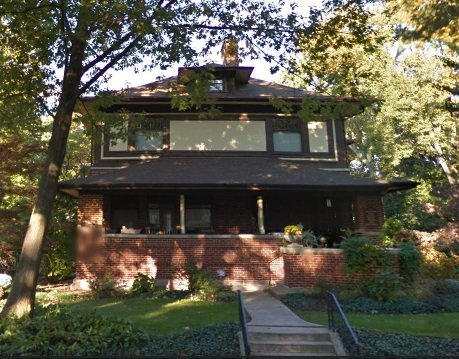 Frank Lloyd Wright was interested not only in pushing the boundaries of home design, but in making homes that would improve life. This Frank Lloyd Wright home built in Chicago in 1900 incorporates the “fireproof” brick and asphalt that we see copied in the Tanner-Harsch home on Mulholland.

It’s not hard to imagine where Henry Harsch derived the inspiration for his 1910 remodel. Chicago architects, such as Frank Lloyd Wright, were inventing a new and uniquely American style of architecture that was the epitome of modernity at the time.

Frank Lloyd Wright wrote three illustrated articles about his post-1900 home concepts that were published in Ladies Home Journal. These were “A Home in a Prairie Town” (Feb 1901, see illustration below), “A Small House with ‘Lots of Room in It’” (Jul 1901) and “A Fireproof House for $5000” (Apr 1907).

13 thoughts on “Knit Hearts of the Past”