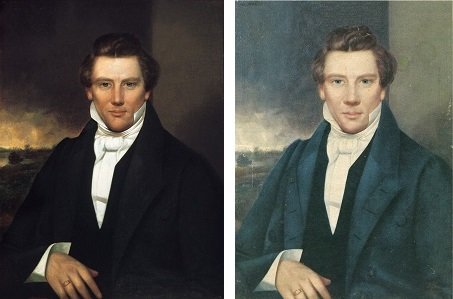 The November-December 1980 issue of Sunstone contained an article by Lorie Winder examining the physical descriptions and depictions of Joseph Smith. Though physical characteristics tell us little about the man himself, I understand why she titled her article In Search of the Real Joseph Smith.

I have frequently used the forward facing oil painting created in 1842 by an unknown artist in my posts about Joseph Smith. This is a painting that was owned by Joseph Smith III and is now owned by the Community of Christ. But this image is incorrect in various ways when compared to Joseph’s death mask:

When corresponding with someone recently about the advanced review copy of my Reluctant Polygamist book, I asked about using the picture on the cover of the book. According to one theory of copyright, the image is in the public domain because it is a work published before January 1, 1923 and it is anonymous or pseudonymous due to unknown authorship. Thus it is in the public domain in the United States as well as countries and areas where the copyright terms of anonymous or pseudonymous works are 92 years or less since publication. However the image could still be restricted.

This version of the painting shows Joseph in a blue jacket, which matches other images of Joseph created during his lifetime, such as this lithograph by Sutcliffe Maudsley showing Hyrum and Joseph Smith:

The eyes in HPH painting are blue as reported by various accounts included in Lorie Winder’s article, rather than the dark blue/hazel in the Joseph Smith III copy of the painting.

I suspect the “H P H” inscribed on this painting refers to Herald Publishing House, making this most likely a painted reproduction of the Joseph Smith III painting produced by the publishing arm of the RLDS Church necessarily after 1860, but likely during the lifetime of Emma Smith (d. Apr 1879). Input from Emma Smith could explain certain differences between the original and the copy (eye color, coat color). I do not know how many painted reproductions were created.

It seems the “daguerreotype” of Joseph Smith created by W. B. Carson circa 1879 is a picture of one of these painted copies, a copy “cropped” or painted to eliminate the background. Carson’s studio was in Peoria, Illinois, a mere 100 miles east of Nauvoo (and 100 miles southwest from Plano, Illinois, where the Herald Publishing House press was located at the time). The Library of Congress copy of the daguerreotype along with their descriptive data is below: A daguerreotype of the original painting could not have captured the details of Joseph’s black outfit in the original painting. The artist(s) undoubtedly meant well, but the cropping of the image makes Joseph look like his head is a brioche bun. The painted images do not properly reflect the detail of why Joseph combed his hair forward on the sides, which I understand was the lack of hair on at least one side due to the mob attack of 1832 (a lack of hair on the side is seen in Mary Elizabeth Rollins Lightner’s watercolor of Joseph Smith, see Winder, In Search of the Real Joseph Smith, p. 33.)

I am not aware if someone has attempted to use photoshop to “correct” a digital version of the original 1842 painting. But faced with the HPH copy, it seemed that even I could adjust the elements of the painting to match the death mask.

I used extremely simple digital methods to develop the update (Microsoft’s basic Paint program). The lips are fuller, though possibly not as full as the death mask. The eyes are wider with trusting pupils. The nose is also wider, giving a small hint of the nose arch seen in the death mask and the Sutcliffe Maudsley portraits. The result of my digital manipulations of the HPH copy are shown at the beginning of this post, next to the unmodified original painting.

It is interesting to note that the ways the original painting was “wrong” are features that lead people to have less trust. The narrow, small mouth, the narrow, tiny eyes, the thin nose, reminiscent of a fox or ferret.

Ironically, correcting the image to match the proportions of the death mask makes the result look more like the work of a “talented but untrained” individual, as the original artist has been characterized.

Every time I’ve posted something about images of Joseph Smith, folks have criticized me. Still, I see some value in attempting to use artifacts from before Joseph’s death to determine what he looked like in life.

8 thoughts on “In Search of the Real Joseph Smith”