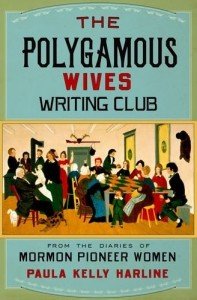 One of the perks of being a Mormon blogger is the opportunity to comment. Recently I was informed of a new book Oxford University Press will be publishing in June 2014, titled The Polygamous Wives Writing Club: From the Diaries of Mormon Pioneer Women, by Paula Kelly Harline.

Ms. Harline assembles stories of twenty-nine women who entered into polygamous marriages between 1847 and 1890. Ms. Harline wished to show the lives of regular women who remained faithful to Mormonism yet were not leaders themselves or wives of leaders.

Despite the title of the book, these women were not members of a club, though at least three of the women mention sharing their writings with other women. However Ms. Harline is able to group the women in sets of two or three as women experiencing similar circumstances during the same period of time. Thus we get a broad sense of the evolution of the practice of polygamy, or “the principle” from the time Mormons arrived in Salt Lake Valley until the days leading up to and following the Manifesto.

From the stories extracted from diaries and autobiographies, Ms. Harline demonstrates the heartache a first wife experienced when a husband took on other wives, almost always younger women. Similarly, we see the pain as a young woman marries an older married man, only to find that the first wife is downright hostile. Though we do see polygamist wives who form close bonds with sister wives, these twenty-nine women more frequently reflect on the disappointments in their marriages, with most the women’s sister-wives mentioned infrequently except in negative terms.

The stories from the first portion of the book discuss polygamist wives who married during the early days (1847-1869), when men were aggressively encouraged to take on plural wives. During this time Ms. Harline writes that only 3 percent of the women remained unmarried by age 24, with 83 percent of women marrying in their teens and over a quarter (27%) by age sixteen. My own analysis of family members who married before coming to America on the Mayflower shows that the average age for a woman in that culture to marry was approximately 24 (i.e., 50% of women would have remained unmarried at age 24). Studies of mortality associated with childbirth shows there is a significant increase in maternal death when the mother is younger than 16. So Brigham’s emphasis on polygamy during the early Utah period resulted in women marrying at much younger ages than typical, and arguably resulted in avoidable deaths. Later in the book, Ms. Harline reflects on the Lion House and Beehive House – built with the vision of a great family of dozens of wives and their children living together in communal efficiency. Like the general experiments in communal living under the United Order, Brigham and numerous other men and women found that large groupings of humans rarely function well as “families.” We see the predictable frictions time and again in the stories of the individual women.

Many of these early stories reflect the pain women experienced when their polygamous reality was compared to the expectations these women had grown up with of monogamous family life. Though a striking 12% of sister-wives were biological sisters, the vast majority of early polygamous wives were not related, and were often from other countries, creating opportunities for clashes in cultural expectations, beyond the obvious difficulty with sharing a sexual partner with another woman.

By 1870-1880 we reach an era where polygamous wives have grown up surrounded by polygamous households. They know what to expect in plural marriage. There are still disappointments and quarrels, but the anguish of the women over their husband’s inability to satisfy monogamous standards of emotional closeness and material support is less than the earlier tales.

Actions of the federal government cause hardship as early as 1856, directly contributing to the famine conditions cited in several stories. Though Ms. Harline does not explain, Brigham Young’s show down with federal troops in the late 1850s caused him to retain the Saints’ stronghold in Provo long into the summer, causing massive damage to untended cropland and a landscape filled with the rotting bodies of unfed farm animals. The Utah economy would be blighted for ten years because of that summer of resistance. However it was the polygamy persecutions of the 1880s and later that caused the majority of the pain for later polygamous families. Men who “cohabited” were sent to penitentiary, their plural wives forced to testify against them. The anger of men, the families of their birth, and their first wives often turned against the hapless young women who had agreed to become plural wives, persuaded that plural marriage was required to reach the highest heaven.

Polygamy and the Manifesto

The women’s stories highlight the terrible disruption the Manifesto created in many households. Men were told they must abandon their plural wives. Children born after 1883 were considered bastards in the eyes of the state.

The most disturbing story from this last set is the story of Annie, a nearly-illiterate child tricked into marrying her abusive and coercive step-father, Henry Chestnut. Annie’s story takes up a disproportionately large amount of the body of the book, and the story is further emphasized by being the last story, and a chapter that is devoted to one woman, instead of cutting between two or three separate women. When Annie was not yet a teenager, Mr. HC, as she referred to him, would say Annie would be his little wife when she got older. Annie wrote she would “get of the bench” and say “no you bet I wont Marrie a old man…” When a marriage ceremony was conducted, then-fourteen year old Annie wasn’t even aware she had become Mr. HC’s wife until the ride home. Annie eventually divorces Mr. HC, only to marry Thom Day, who beat her (physical abuse, we then realize, had never appeared in any of the stories of polygamous marriages in this book).

One of my ancestors is Joseph Leland Heywood, one of the three Nauvoo trustees, first US Marshall of Utah Territory, and bishop of the 17th ward (where the Conference Center now stands). So I was amused that Heywood’s third wife, Martha Spence [Heywood], was considered a “regular” polygamous woman. I have read Martha Spence’s diary and Kathryn H. Ipson’s exquisitely documented Ever Faithful: The Life of Joseph Leland Heywood. So I was able to see how Harline cherry-picked episodes from Martha Spence’s life that supported her thesis of a lonely, heart-sick woman deprived of the companionship she yearned for. 1 Ms. Harline never even mentions the name of Heywood’s fourth wife, Mary Bell, an orphan girl who had been in the Heywood household when Martha arrived in Utah, who appears in Martha’s diary by name, a girl Martha and the other two wives persuaded Heywood to marry “as they all loved her, and she did much to lighten the work load.” Mary Bell [Heywood] was the sister wife with whom Martha lived for the last several years of her life, belying the loneliness Ms. Harline depicts.

Another astounding lack is seen as Ms. Harline describes the struggle Mormon leaders faced as they tried to determine whether to implement, mandate, continue, and ultimately end the practice of polygamy, speaking of the challenges facing Joseph Smith, Brigham Young, John Taylor, and Wilford Woodruff, respectively. Ms. Harline never mentions the revelation John Taylor received on September 27, 1886. Taylor had apparently asked, “Can we end the New and Everlasting Covenant?” By which Taylor clearly meant “Can we stop practicing plural marriage?” But given the question asked, the Lord of Taylor’s revelation responds, “how can I revoke an everlasting covenant… I have not revoked this law nor will I for it is everlasting…”

This revelation is supremely germane to Ms. Harline’s narrative, as it demonstrates Taylor pleading to end polygamy, but due to lack of doctrinal understanding asking to end the New and Everlasting Covenant, which even Primary children in our day know is crucial to salvation and allowing families to be forever. The resulting almost sputtering refusal Taylor records in his revelation gave rise first to the defiant post-Manifesto plural marriages of Taylor’s son, Apostle John Whitaker Taylor, and then the militant “restoration” of polygamy by Lorin C. Woolley 2 starting in the 1920s, giving rise to the vast majority of modern “Mormon” fundamentalist sects that practice polygamy today.

Finally, I found it hard to keep track of the women, particularly as Ms. Harline rarely tells us enough about their birth family for us to infer a maiden name. They are referred to primarily by their first names only, and when a surname is given, it is always the surname of a husband. Given the dozens of other women (other wives, mothers, sisters, daughters) one finds it hard to track whose story we’re talking about anyway.

I read the book in a preliminary form, lacking all pictures and maps that I assume will appear in the final text. Similarly, it was not possible to easily determine which quotations were documented with end-notes.

Paula Kelly Harline has assembled an intriguing set of lesser-known voices documenting the experience of Mormon women involved in polygamous marriages. For those convinced that polygamy could never be anything other than grindingly abusive, an institution to which prostitution is preferable, these narratives will seem too sweet. For those raised with stories of ancestor sister-wives who never quarreled, these stories will seem too harsh.

However, these tales, particularly the “transgressive writing” of Angelina [Farley], will cause modern diarists to reflect on whether they record a true history, when the act of writing is predominantly prompted by hardship, complaint and anger.

As for me, I think I’ll sit down and write ten reasons I treasure my beloved, describe in writing the sweet joy it is to be parent to my children, and other wonderful things about the life I lead.