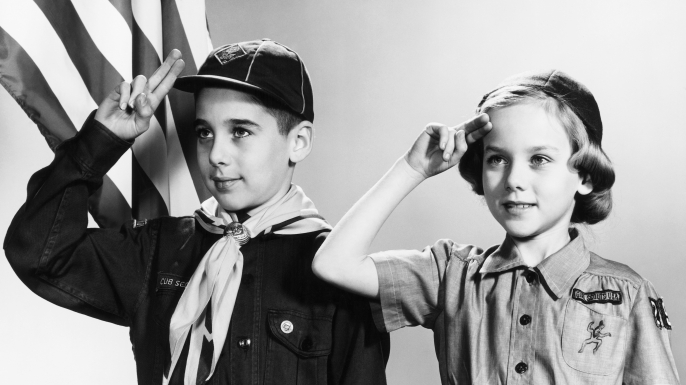 On 11 October, the newsroom for the Boy Scouts of America posted something you may have heard of by now:

“Today, the Boy Scouts of America Board of Directors unanimously approved to welcome girls into its iconic Cub Scout program and to deliver a Scouting program for older girls that will enable them to advance and earn the highest rank of Eagle Scout.”

Some bona fides are likely to be demanded of anyone seriously commenting on this, so here are mine. I’m an Eagle Scout. My father is too. My grandfather was too. I’ve got a scout shirt hanging in my closet with adult knots on it. I’m a guy who’s had some experience in the program. That doesn’t make me unique; Mormon boys are also Boy Scouts. It’s how we roll.

With that out of the way, it’s also important at this stage to read the details of the move. Consider, from the press release:

“Starting in the 2018 program year, families can choose to sign up their sons and daughters for Cub Scouts. Existing packs may choose to establish a new girl pack, establish a pack that consists of girl dens and boy dens or remain an all-boy pack.  Cub Scout dens will be single-gender — all boys or all girls. Using the same curriculum as the Boy Scouts program, the organization will also deliver a program for older girls, which will be announced in 2018 and projected to be available in 2019, that will enable them to earn the Eagle Scout rank. This unique approach allows the organization to maintain the integrity of the single gender model while also meeting the needs of today’s families.”

I’ve had a variety of conversations with a variety of people about co-ed scouting over the years, and in general I’m for it. However, the specifics have always been hazy. The single-gender den idea sounds like a reasonable way to thread the needle. Indeed, I would assume that the coming “older girls” program details are likely to just say “oh yeah, and single-gender patrols in integrated troops, too” and leave it at that. It’ll mean lots more leaders will be needed, since the BSA is extremely keen on having lots of leaders around to minimize sexual shenanigans. But the BSA is already on top of that so making it a point of opposition is a non-starter.

Beyond that, what are we to make of this?

Responses are all over the place in the vast fever-swamp of internet comment threads, but ultimately fall into one of four camps:

Which is it? As with many things, I suspect the truth is somewhere in the middle.

The BSA has felt increasingly antiquated as time has passed. That’s not to say that the values of scouting are now passé—they certainly are not. However, the BSA’s method of teaching those values hasn’t changed much in 100 years. One might even say that it’s all gotten a little hokey and stilted, with the lessons getting lost in the trappings and an increasingly grey-haired old guard clinging to a Norman Rockwell world that no longer exists.

Re-evaluating the way scouting works, however, offers the BSA an opportunity to re-examine (and remember) what scouting is supposed to be about. In the process, it creates an opportunity for the BSA to reinforce the critical concepts it purports to hold dear. Being trustworthy, loyal, helpful, and so forth is still a big deal. If teaching those things to girls helps everyone involved remember that those things are the most important things, then this will be to everyone’s benefit.

However, the BSA is also an organization that has shown vulnerability to the intense social pressures of our age. I haven’t seen it yet, but I’m running a clock on how long it takes for the trans- community to start complaining about how sex-segregated cub scout dens will impact the gender-fluid. Could this move open the door to a vast array of foolishness that buries the critical lessons of scouting under an ever-increasing pile of social signaling and pitiful attempts at making scouting more woke?

What really strikes me, though, is that we haven’t seen a response from the Church yet. It’s only been a couple of days, but this can’t possibly have been a surprise to the LDS scout folks. Even if they didn’t get any kinds of heads-up on this announcement, this is still the kind of thing that the Church is usually ready to address, even if the initial response is something like “we are examining the BSA’s decision, and look forward to having a conversation with their leaders about serving the youth of America”. But there’s nothing.

And thus far, the BSA should probably perceive that as really bad news. It says to me that the die has been cast on scouting in Salt Lake. The brethren are moving toward building an LDS-specific program for youth, and have been for years now. That progress won’t be stopped, and the BSA leadership knows it. They have to anticipate that the LDS units won’t last another decade, and if the BSA wants to survive the inevitable Church pullout then the organization has to expand the rolls any way they can.

Mormontarian is a skeptical Gen-Xer living in the American midwest. He hates Sunday School, but of course that means Heavenly Father called him to the presidency thereof in his awesome ward.