In all that we hear about fathers, one of their most fundamental, axiomatic even, contributions to our lives is seldom mentioned on Father’s Day: Fathers are they who gave us half or more of our genetic composition. “Or more?” the reader may ask. I shall elaborate with special consideration of the patriarchs Abraham, Isaac and Jacob and the children of Israel.

A measure of the genetic similarity of two relatives is the coefficient of relatedness, which ranges from zero, for two completely unrelated individuals, to one, the relatedness of a person to herself. It can be thought of as either the fraction of genetic heritage that is shared by two people, or as the probability that a particular gene that one person possesses is also shared by her relative. The relatedness of a parent and child is 1/2, as is the relatedness of full-siblings. For half-siblings relatedness is 1/4. For aunts and uncles and their nephews and nieces, it’s also 1/4, and for first cousins, relatedness is 1/8. There’s a famous population genetics joke about this. “Would you give your life for your brother?” “No, but I would give my life for four nephews or for eight cousins.” 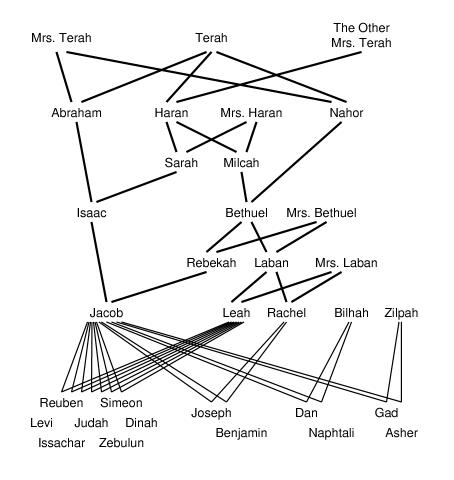 The relatedness of Abraham and his half-niece Sarah was 1/8. Consequently, the relatedness of each parent to their son Isaac was greater than 1/2. Sarah, besides being Isaac’s mother, was also his half-first cousin, and Abraham was the half-brother of Isaac’s maternal grandfather. At first glance, that web of ancestry would raise Isaac’s relatedness to both of this parents to 9/16; however, inbreeding attenuates the increase in relatedness. Being related to his parents through two paths made it possible for Isaac to inherit two copies of genes that Abraham and Sarah possessed singly, and that reduced his genetic similarity to his parents. The formula for calculating the coefficient of relatedness is:

For this formula, summation is over lines of ancestry to common ancestors of the individual’s father and mother, n is the number of generations from the individual’s father to a common ancestor, and n’ is the number of generations from the individual’s mother to that ancestor. The coefficient of inbreeding is the portion of a person’s genes that are identical by descent on both sets of chromosomes. The inbrededness for the children of married first cousins is 1/16 = 6.25%. Considering Isaac, Terah is his grandfather by Abraham and his great-grandfather by Sarah. That gives Isaac also an inbrededness of 1/16 = 6.25% and a relatedness to Abraham and Sarah of (1/2+1/16)/√(17/16) = 9/(4√17) = 55%.

Bethuel, father of Rebekah, had a pattern of ancestry symmetric to Isaac’s and was a double first cousin to Isaac; their fathers were brothers and their mothers were sisters. Isaac and Bethuel’s relatedness was 10/17 = 59%, closer than brothers. Consequently, calculation of relatedness between Isaac and Rebekah involves six lines of ancestry: from Haran (1) and from Mrs. Haran (2) by Sarah and by Milcah and Bethuel; from Terah (3) and from Mrs. Terah (4) by Abraham and by Nahor and Bethuel; and from Terah alone by Abraham and by Haran, Milcah and Bethuel (5) and also by Haran and Sarah and by Nahor and Bethuel (6). This makes the relatedness of Isaac and Rebekah (1/16 + 1/16 + 1/16 + 1/16 + 1/32 + 1/32)/√(17/16) = 5/(4√17) = 30%, intermediate to the relatedness of half-siblings and full-siblings. Their sons Jacob and Esau had an inbrededness of 5/64 = 7.8% and a relatedness to each other of 71/138 = 51%. Their relatedness to their father Isaac was 57% and to their mother Rebekah it was 56%. The relatedness of Jacob and Esau to Abraham, and also to Sarah, was 34.6%, compared to 25% for a standard grandparent-grandchild relationship.

That’s all for this Father’s Day. When I’ve time, I’ll wrap this up with a look at Leah and Rachel and their children, the original house of Israel, and give some references for further reading, including some mention of Sewell Wright.

2 thoughts on “Father’s Day Special: Relatedness of Abraham and the Children of Israel”