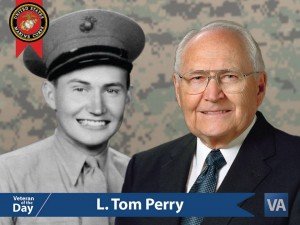 Just a reminder for our readers and friends, “Funeral services for Elder L. Tom Perry, a member of the Quorum of the Twelve Apostles of The Church of Jesus Christ of Latter-day Saints, will be held in the Tabernacle on Temple Square on Friday, June 5, 2015, at 11:00 a.m. MDT. The funeral will be open to the public ages 8 and older.”

Elder Perry was also honored yesterday by the US Veteran’s Administration as their Veteran of the Day.

“Today’s Veteran of the Day is Tom Perry, who passed away this weekend at age 92. Tom joined the U.S. Marine Corps in 1944 and at the end of World War II was among the American forces that landed on Saipan. After the war, he was among the troops sent to occupy Japan.

“We were the first group to land in Nagasaki,” Tom would tell friends. “I will never forget that experience as long as I live.” Responding to the devastation all around them, Tom and fellow Marines helped in their off-hours to rebuild churches and secure food and shelter for orphaned children.

Tom continued a life of service as a senior leader in The Church of Jesus Christ of Latter-day Saints. His office was decorated with an American flag, jars of sand from Iwo Jima and Saipan, and a photo of the chapel he helped build on Saipan. “I would like to say I have always been proud of the time I served in the Marine Corps,” Tom would say.