The 2017 eclipse is yesterday’s news, but is still worthy of note.

Since we were vacationing in the center of the country for other reasons, we decided to go to Hopkinsville, KY, to view totality. Hopkinsville gave itself the nickname of “Eclipseville” for the event, as it was the town closest to Greatest Eclipse, the point experiencing totality when the sun, moon and earth are perfectly aligned. Better, the skies were predicted to be entirely clear. Humidity was so low that even jet contrails evaporated within seconds of being created in the skies above us.

There were parking lots charging $20 and more a space, but we figured we’d head to the local LDS chapel. A close look at the NASA site shows we were less than 2 miles from the center of totality, which meant we lost only 0.7 seconds of the 2:40 totality we might have experienced elsewhere.

The local LDS folks hadn’t organized to cash in on the eclipse, so parking was free and plentiful. There was shade as well as grassy places to put blankets while we waited for the main event. LDS folks had gathered from as far as Texas and Michigan. Like little goslings, we’d gathered “home” to the LDS chapel in the path of totality. Children ran around and adults chatted with one another, offering eclipse glasses to anyone who might not have brought enough for everyone.

One lady dialed her bishop, who contacted the bishop in Hopkinsville, who in turn sent a ward clerk over to open up the building. So we enjoyed all the perks of access to the church (water fountains, bathrooms, kitchen facilities) while waiting for the big event.

My husband had brought binoculars so we could see the eclipsed sun with even greater clarity, but showed us a trick for using the binoculars to see how the moon was passing over the face of the sun. 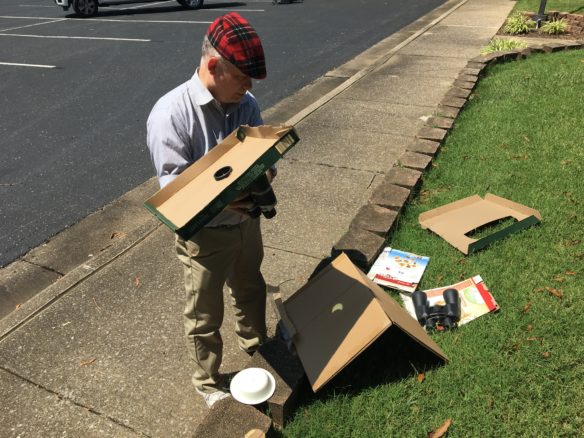 The spaces between leaves create tiny “pinhole” cameras, allowing us to simply look at the ground under the trees to see myriad images of the partially-eclipsed sun in the hour or so before and after totality. 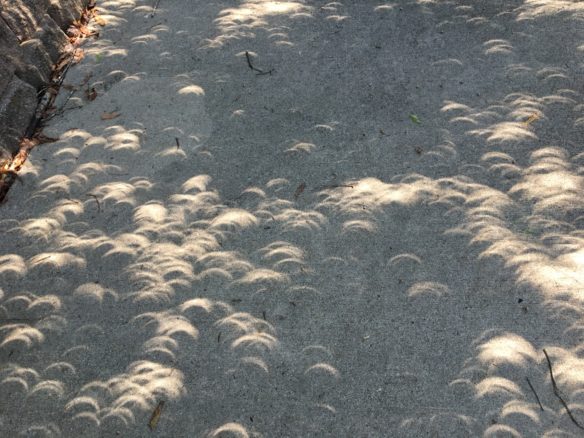 And of course, with proper ISO 12312-2 eclipse glasses, it was possible to look directly at the sun as the moon crawled across the surface. 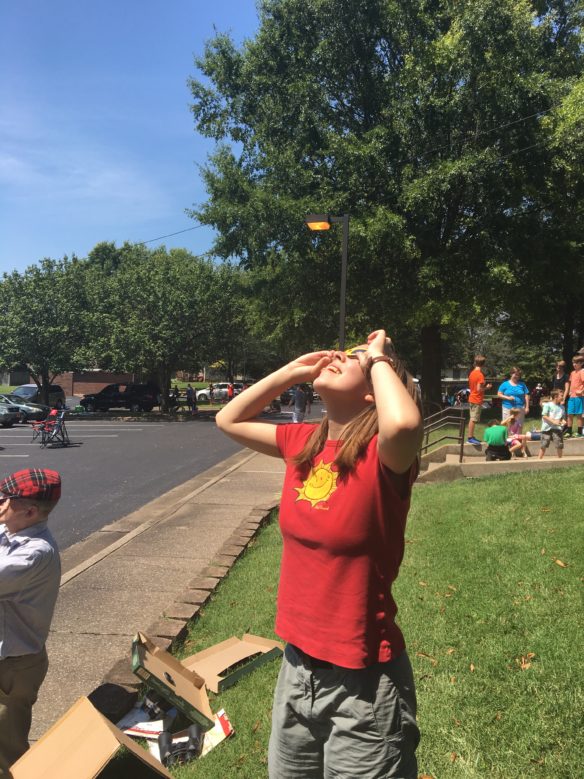 Sitting there looking up as the mass of the moon moved in front of the sun, I was struck by the reality of the moon and sun as I never have been before. It is a sight that inspires the thought, “Now, for this cause I know that man is nothing, which thing I never had supposed.” 1

During totality we lay on the grass, looking up with our binoculars, watching as solar flares arced beyond the shadow of the cratered surface of the moon. The magnetized iron plasma surrounding the sun created delicate petals licking outwards from the black disk of the moon. 2 Then all too soon, the edge of the sun peeked out from behind the moon, creating a “diamond ring” effect. It is lovely to see in pictures but so sad to see in real life. Because it is the signal that the end has come.

We cleaned up after ourselves and bade farewell to our eclipse friends. Then we joined the thousands of other travelers returning to their normal lives, spending hours crawling along the surface of the earth after our moments watching the dance of moon and sun.

10 thoughts on “Eclipsing in Hopkinsville”