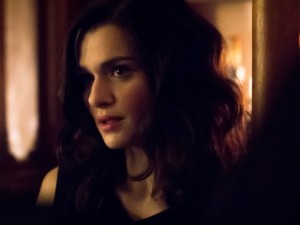 In 2000, a British judge found Deborah Lipstadt innocent of libel with respect to her book, Denying the Holocaust. The movie Denial, now in post-production, documents the real-life court battle between Holocaust-denier David Irving (played by Timothy Spall) and Professor Lipstadt (played by Rachel Weisz, pictured). Directed by Oscar-nominee Mick Jackson and based on the book Deborah Lipstadt wrote about the trial, the movie may be expected to emphasize the difference between conscientious or objective historical research and “histories” that knowingly and “deliberately mis-represent or manipulate historical evidence.”

David Irving waited to sue Lipstadt in the British courts because English libel law puts the burden of proof on the defendant rather than the plaintiff. Lipstadt and Penguin won the case by demonstrating in court that Lipstadt’s accusations against Irving were substantially true and therefore not libelous. Mr Justice Gray produced a written judgment 334 pages long detailing Irving’s systematic distortion of the historical record.

The trial was the first time a legal standard was established for historical objectivity. For those of us who don’t have time to master all 334 pages, Wendie E. Schneider distilled the ruling into seven concise principles:

2) Don’t dismiss counter-evidence without scholarly consideration. This is not to say that flawed evidence can’t be dismissed, rather that the doubting historian must produce scholarly rationale for ignoring inconvenient data.

3) Be even-handed in treatment of evidence. We see this often in Mormon history. Critics of Joseph Smith will ignore Joseph’s own statements or the statements of his friends, even when those friends weren’t Mormons themselves. Conversely, some will only hear what Joseph Smith said and ignore the truth if told by someone who fought against Joseph Smith.

4) Identify speculation when suggesting conclusions. I recall noticing consistent projection of certainty in Mormon Enigma, when discussing matters that no one can know with certainty. This blog post is too short to list all the works flawed by inadequate use of the subjunctive case.

5) Correctly transcribe or translate documents. An egregious example of this with respect to Mormon history is Michael Quinn’s transcription of the ecclesiastical trial of Joseph Ellis Johnson. It is not that what was transcribed was not correct. It is that the framing context of that trial was omitted, obfuscating which “Joseph” frigged Joseph Ellis Johnson’s mother-in-law, Mary Heron [Snyder]. In particular, insufficient notice was paid to the presence of Joseph Kelly, who was escorted to Salt Lake City in an express company with Joseph Ellis Johnson. Quinn and his respondents, such as Brian Hales, have not considered this, leading them to presume the Joseph named as frigging Mary Heron must have been Joseph Smith. Omissions should not change the meaning of the extracted information. Yet in the case of the Joseph Ellis Johnson case, the omission of context has completely changed how this document is understood, as seen by the number of lists where Mary Heron’s name can be found as not only Joseph Smith’s plural wife, but a known conjugal wife.

6) Weigh the authenticity of all accounts. A child might stick their fingers in their ears and scream “I’m not listening!” A conscientious historian must never commit equivalent childishness. I witnessed this when the initial Tailhook scandal broke. The women in my office in a Navy facility were highly critical of the then un-named woman claiming to have been sexually assaulted. A more seemly response would have been to wait and see.

7) Consider the motives of historical actors. Properly understood, all historical data is good data. When a known liar tells you there is no money in the safe, this communication is a valuable hint regarding the possible location of the money. To give a more nuanced example, when Joseph Smith denied he was practicing polygamy, this should not be taken as a blanket assertion that Joseph Smith never covenanted with plural wives. By his own account, he was trying to protect women and men from those who were teaching that illicit intercourse was acceptable, so of course he condemned polygamy in that context and denied he had any part in the secret sexual underground implied by the term ‘polygamy.’ Similarly Emma Hale [Smith] would claim she was Joseph’s only wife weeks before her death, even though at least one key RLDS leader had witnessed her participation in the ceremonies joining Joseph to other women for eternity. Emma was likely trying to ensure her sons were not persuaded that their father had been a seducer, particularly given the then-recent return of William Smith to the RLDS community.

I have been astounded at the rich trove of contemporary, primary documentation that exists regarding Nauvoo events. Yet too many individuals would prefer to base their world view on second-hand tales told long after the fact.

A case in point here is the late assertion by Alice Merrill Horne that Eliza Snow was gang-raped and rendered infertile. Alice herself says she was a child when she overheard the conversations on which she based her assertion.

Eliza’s nephew, who eventually came to the conclusion that Eliza had been pregnant and lost the child, was twelve when Eliza died. He had access to various of Eliza’s contemporaries, even if we deny the possibility that he could have discussed the troubling rumors with Eliza before her death.

Lastly we have Eliza’s own writings. While she does not refute the possibility that she might have been raped, she wrote:

Clad in the heav’nly robes of innocence,
Amid that worse than every other blast–
The blast that strikes at moral character
With floods of falsehood foaming with abuse…–
Thrown side by side and face to face with that
…faithless, rottenhearted wretch, whose tongue
Speaks words of trust and fond fidelity,

Whether Eliza was speaking of herself or another, an Eliza who might have been raped elevates moral corruption to the place of the greater disaster. Of which innocent did she write that poem, if not of herself? In the context of the prior testimony of multiple female victims, it seems Eliza’s own words regarding seduction should weigh more heavily in the collective historical consciousness.

In fact, these three accounts are not mutually exclusive, with the possible exception of Alice’s assertion that the rape rendered Eliza infertile.

Few recognized historians commit fraud on purpose. It is true that Mark Hoffmann forged documents, but relatively few individuals still cite those forgeries when developing hypotheses about the past.

I have seen my own words be distorted when retold by others. However those distortions are not likely to be intentional distortions, but an honest inability to understand what I had written.

While it is possible to manipulate statistics in service of a fraudulent historical viewpoint, I suspect it is often merely that people don’t know enough about math to avoid mangling the statistics. We see this in the case of people who maintain that there would have been more babies if there had been no polygamy, refuting the “raise up seed unto me” purpose of plural marriage in the 1800s. The argument that wives of “polygamists” bore a reduced number of children does not appear to consider the heavy load of service these men and their wives bore and would still have borne even had there not been polygamy.

A consistent complaint of the women in our midst is the lack of consideration for feminine realities when recording or interpreting history. Though not always a fraudulent mis-translation of the past, history suffers greatly when the experience of half the human family is neglected regarding past events. As someone who has personally experienced the vagaries of reproduction, I am shocked at the continued presumption that Joseph Smith and his faithful supporters engaged in wanton sexuality in light of the significant lack of children born to plural wives in Nauvoo.

As for those who are knowingly manipulating the historical record, may the fruit of Irving v. Lipstadt yield a standard that makes such manipulation increasingly difficult to foist upon those currently too uninformed to know better.