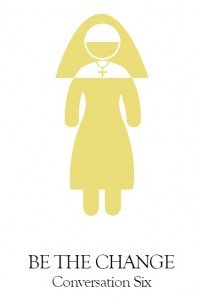 After so many weeks that I’d stopped checking, the folks who support female ordination in the LDS Church have posted the final promised episode. They used to be called discussions and are now called conversations. Rameumpton’s already covered this, but since I covered the other five episodes, I want to complete the set.

Before I proceed, I just wanted to comment on the graphic. This is not a graphic geared toward a Mormon audience. It is clearly a nun wearing a crucifix. I suppose they are trying to evoke the image of Mother Theresa, who is quoted under the graphic.

But Mormons tend to see the crucifix as a symbol of Christ’s death, and we prefer to think of Him resurrected rather than on the cross (despite the verbal imagery in most sacrament hymns). And nuns are typically associated with the Catholic church and vows of celibacy. If one is told, “but this is supposed to be a stylized Mormon woman in ritual garb,” then I’d say, “looks like a nun to me.” Actually, it looks a bit like some kind of alien nun I might see in a science fiction show (shades of Doctor Who).

I think a better graphic would have been the iconic hands from Michelangelo’s painting of Adam and God on the ceiling of the Sistine Chapel. Or perhaps a woman with open arms. At any rate, something other than this graphic.

This sixth discussion puts forward a long list of items they have gleaned from other websites. Here are my reactions:

If I had my druthers, the first two changes I would see made are:

1) Increasing access to the handbook of instructions, with an invitation for those female stake leaders who gain access (under my idea of how this might occur) to provide constructive feedback in support of the key suggestion and its corollary, and

2) Encourage women to resume the practice of appropriately exercising their faith to bless by discussing the history of female blessing in conference addresses (and updating the handbook of instructions as appropriate, perhaps even before distributing the handbook to the wider audience as suggested in change #1).

The episode next talks about Esther, the Jewish woman who became queen and was able to save her people from Hamar’s planned genocide by risking her life (turns out the king was pleased and didn’t cut off her head).

Then there are a bunch of questions that imply to me that other women don’t take the stand and talk about stuff like this in testimony meeting.

Except I did this past Sunday. I talked about how my mother used her considerable intellect to find the just and merciful in each new policy, such as the standardization of funding across congregations. I even accidentally said the word “crap” during my testimony (speaking of the inadequate facilities the poor could erect in the days before the standardized budgets that are based solely on attendance and tithing status). And then I went on to talk about the treatment of men and women, providing a possible explanation for the current reservation of priesthood to men, namely the fact that those denominations that have put women in charge via ordination have failed to realized the hoped for increase in participation, and have in fact found the number of adherents dwindle.

I said I didn’t know why this was, and I dearly hoped to learn why in the resurrection, when I would see as I am see, no longer through a glass darkly. And I opined that our leaders are probably similarly wondering why not, as they love their wives and daughters.

I don’t know why other women can’t speak up and yet still see themselves as sustaining the brethren. But good grief, we have open mic once a month every month (aka testimony meeting), not to mention Sunday School, Relief Society, and access to bishops and other leaders. I can well remember the lesson where we discussed Paul’s suggestions for female deference, when I spoke up strongly, and wondered aloud why none of the married women were speaking up (this was long enough ago that I wasn’t one of the married women).

I’ve always spoken up, except when a teacher was choosing to not allow me to interfere with their vision of how a lesson should transpire. In which cases, I have typically made a point of going up to the teacher and sharing what I would have said had I been called on. It gets the matter off my mind, and helps the teacher know me, and hopefully trust me, or at least learn from me.

The episode next covers some tips for actually conversing in a manner that won’t make people angry and alienated. I think these suggestions are pretty close to the Dale Carnegie tips I covered when critiquing a prior episode.

Next the episode suggests a variety of questions those seeking female ordination should be prepared to answer. I’d be happier if I didn’t get the sense that supporters were being prompted to practice how to say shibboleth. Among these reasonable questions are a few that betray the continued mindset or schema that female ordination is a necessary outcome:

• Why is ordination necessary for women in the LDS church?

• How do you think ordaining women would affect the Church?

• How can you sustain the prophet and support women’s ordination?

But one of these questions was striking, and was a question whose answer I’m interested to hear:

• What will you do if the answer is no?

If God continues to say no, what will the faithful supporters of female ordination do?

In the last pages of this final episode, we are provided examples of two cases where dialogue occurred. In the first case, a woman goes in and talks with her bishop for an hour about her feelings on this matter. In the second case, a stake in the Boston area conducts a special non-attributional event to reach out and involve those with concerns in discussion.

Finally, the episode ends with making the analogy that the actions of those seeking female ordination are simply like those who lowered their crippled friend through the roof to reach Jesus, as the door was blocked.

I was pleased that this episode did not include a call for supporters to gather and resign their memberships. And yet this has been a past suggestion, and the story of Esther, the poem about leaving fear on Temple Square, and the talk about making a hole in the roof when the door is barred almost reads like a secret code. If your bishop isn’t willing to welcome an hour of discussion on concerns, it seems, or if your stake isn’t willing to hold a non-attributional event, you are justified in going through the roof, leaving your fear on Temple Square, and screwing up your courage at risk of your own spiritual life, as Esther did in defense of her people.

I would be pleased if those who resonate with the message of those seeking female ordination would foster goodwill and understanding by building relationships, talk about common ground and shared beliefs, work together on problem resolution, avoid trying to win an argument, and seek understanding and cooperation.