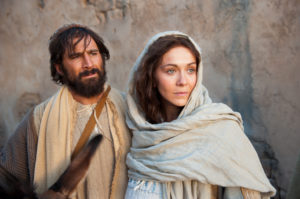 I just wanted to share a few thoughts on Mary and Joseph. They are such an important part of the Christmas story, and even they are starting to get the politically correct treatment lately from spiritual skeptics and naysayers. But, they were good, righteous people who willingly accepted the will of the Lord and bore and raised Jesus Christ. They were chosen to be the earthly parents of our Savior — what a humbling assignment to have.

The first song, I’m sharing with you today is called Mary’s Lullaby, by Wanda West Palmer. Sister Palmer was actually in my ward growing up. She and my mom used to write award winning road shows. She was a fun person, and always invited you to sit at her piano and sing when you came over to her house. The words to the song were adapted from a poem by Bertha A. Kleinman called a “A Yuletide Lullaby”. Sister Kleinman also wrote the words for the Primary song, “I Have Two Little Hands”. Sister Kleinman gave the poem to Sister Palmer because she thought it would be nice if it were set to music. Sister Palmer carried the paper with the poem around in her purse for two years, trying to come up with a tune, to no avail. One day she figured it out, just put the refrain to music, and Mary’s Lullaby was written. If you’ve ever been to the Mesa Easter Pageant, this is the song Mary sings right after she gives birth to Baby Jesus. Here is your assignment for today, go and read Luke 1. This is the chapter where we hear the most from and about Mary — who she was, and how willingly she accepted her job at the mother of the Lord.

Joseph Dearest, Joseph Mine — is a German Christmas carol which dates back to the 16th century in Leipzig, Germany. It was a lullaby sung by the Virgin Mary to Joseph and the Christchild as she was rocking her baby. We don’t know much about Joseph other than he was espoused to Mary, he was a Nazarene carpenter, and of the House of David. I’ve always thought he was probably a very kind, patient and good man as well. He was visited by an angel to tell him of his important part in the Christmas story. In Matthew 1: 18-20, we read, “Now the birth of Jesus Christ was on this wise: When as his mother Mary was espoused to Joseph, before they came together, she was found with child of the Holy Ghost. 19 Then Joseph her husband, being a just man, and not willing to make her a publick example, was minded to put her away privily. 20 But while he thought on these things, behold, the angel of the Lord appeared unto him in a dream, saying, Joseph, thou son of David, fear not to take unto thee Mary thy wife: for that which is conceived in her is of the Holy Ghost.”