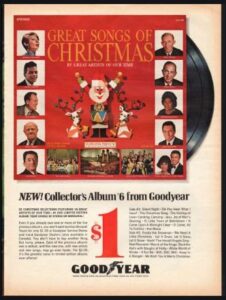 Being a child of the 70s, I was raised right! By that, I mean, my parents who grew up in the 50s and 60s had lots of good music in the house, on vinyl. My mom had quite the record collection, which included many of the Goodyear Christmas albums. Why did a tire company sell Christmas records? For the same reason companies sell stuff today today, to make money. Every year from 1961 to 1977, the Goodyear company would produce these holiday records and sell them in their stores. I don’t know how my mom got a hold of them, but we had them all growing up. It was a treat to stay up late on a a weeknight and listen to records during the Christmas Season. Thankfully we have the miracle of youtube and someone has created a channel with old Christmas records.