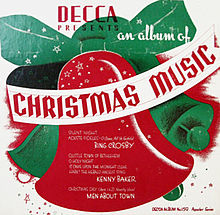 As I’ve been writing about Christmas music the last couple of weeks, I have tried to focus on sacred music. After all it is Christmas .. you know Christ’s Mass. It’s a religious holiday. I’ve been scratching my head as I’ve read more than a few news stories about towns, schools, and shopping malls banning things like nativity displays, public readings of the Christmas story from the Bible, and even candy canes. The excuse usually has to do with something along the lines of, “We’re promoting inclusivity…” bla, bla, bla. Ok, but it’s a Christian religious holiday — it’s ok to include Christ and Christians in there somewhere. The Nativity story is part of the holiday, as is reading the Bible, singing the songs and so forth. The sad thing is these attempts to be “inclusive” end up being “exclusive” to the people whose holiday it is in the first place … Christians, celebrating the birth of Jesus Christ. You know Christ’s Mass…. anyway, I’ll get off my soap box now. I feel much better.

This all said, there are so many good songs both sacred and secular out there that help us celebrate the holiday season. So today, I’m going to share a few songs that are not religious, but still fun Christmas time and wintery songs. This I promise, My Favorite Things and Last Christmas are not on the list.

Silent Night-Sing Out The Glories of Christmas, by the Osmond Family. I’m a huge Osmond fan, mostly because I admire their musical talents. Being siblings they have very tight harmonies and are in tune all the time — these are the things that make listening to music a joy. This is a medley that was frequently sung in their many family Christmas specials. I think it was probably written by one of them, as I’ve never been able to find sheet music for this — but I would love to one day. Do you hear that Donny? Please? It’s a beautiful song. This version is from about 1978 or 79 — it’s fun to see all the brothers with their young families. A couple of years ago, I almost knocked over Alan Osmond in the Provo Temple (sorry Brother Osmond!!) I had to bite my tongue when I realized who it was so I didn’t have a fan girl moment, in the temple.

Kay Thompson’s Jingle Bells sung by Andy Williams. Click HERE to hear Kay sing it … she was amazing. If you search on youtube, you can find many of Andy Williams’ old Christmas specials. They are great.

I don’t like Christmas caroling in any shape or form … but I like Nat King Cole and I love this song, Caroling, Caroling.

I could listen to Vince Guaraldi all day long and never grow tired of his music. Guaraldi wrote the scores for the early Charlie Brown holiday specials. Here is his rendition of “O Tannenbaum”.

Most Christmases growing up our Grandmother would take us over to Gammage Auditorium at Arizona State University to see the Nutcracker Ballet. We’d dress up in our Sunday best, go to Grandma’s house for a fancy dinner (she called then ‘manners parties’) in the dinning room with the real china and silverware (poor cousin Keith, the only boy in the group, had to get the chairs and hold the doors for the gaggle of girls that were the cousins). Then we’d pile into the station wagon and drive to the theater. It was magical every year. My favorite is the Pas de Deux, at the end with the Sugar Plum Fairy and the Prince, but here is a medley of the familiar themes. If you want to watch the ballet, click HERE for the Baryshnikov version.

Now, being from Arizona the whole concept of a “White Christmas” is entirely foreign and strange to me. I really didn’t experience snow till my mission in Bulgaria. Then it was a non-stop blizzard — and a communist blizzard at that, so it was extra miserable, and also the heat went out 3 days before Christmas. Then we got kicked out of our town for Christmas. Fun times! That said I love the movie “White Christmas” with Bing Crosby and Danny Kaye. The song “Snow” is particularly lovely — it’s those harmonies again!