Price: 34.95
Reviewed by: Ivan Wolfe for the Association for Mormon Letters

True objectivity is impossible, of course.  Some researchers use that as an excuse to go into full activist mode when writing histories of volatile topics like race, class, and gender.  Others try very hard to be as objective as possible, creating an academic version of Zeno’s paradox: always covering half the distance toward an objective ideal and often getting very close while never quite making it all the way.  However, some manage to get close enough to the ideal that they might as well have arrived at their goal.

Whether this “objective ideal” is valuable or worthwhile fuels many debates – but this work doesn’t participate in them.  Despite providing a lot of raw material that could be used in more activist or other directions, Kevin Adams tries very hard to stick to the historical sources.  His bibliography is amazingly impressive, and his research into and use of letters, diaries, newspaper articles, and other basic materials of everyday life in the 19th century is clearly thorough and seemingly complete.

While his book attempts to fill several holes and address several controversies over race and class (and gender, to a lesser extent), the work itself appears free of any overt agenda or activism.  Adams clearly shares modern views on these issues, so he does not attempt to excuse or gloss over the bigotry of those days, yet he does not spend time complaining or condemning, either.  He reports what was there.

In the preface and introduction, Adams surveys studies of the 19th century military and states his history “is a study of American society and culture that treats the army as a social laboratory” (xi).  After reviewing recent work on race and class in 19th century America, he states “if ethnicity and whiteness were powerful and compelling historical forces, the United States Army after the Civil War should provide the prefect test case” – and then declares “ethnicity was an extremely weak factor in daily life in the frontier army . . . enlisted men and officers were indifferent about ethnicity” (6).  Instead, class divisions, mostly between enlisted men who barely scraped by on low pay and bad conditions and officers who (sometimes to their financial ruin) acted like aristocrats, provided a more dominant force.  Each chapter of the book after the introduction takes an aspect of these issues and explores them: class divisions, ethnic and racial divisions, how the army dealt with “leisure culture”, consumption and pay differences between ranks, and daily life on a frontier post.

There are many things I personally learned from this work that change my own perception of the 19th century:  the frontier army did very little fighting (much of their work was “blue collar” work aimed at building up the frontier), many officers and enlisted men had deep reservations about how the government treated the Native American they were often ordered to attack (though they still carried out their orders), and that quite a few army officers wrote poetry and literature in their apparently ample spare time. 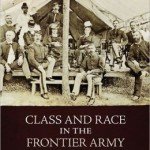 e was like after the Civil War erra – Adams has written a work that should remain essential for several years.

A note for readers interested in Mormon material, as I am reviewing this for the AML:  though Utah pops up in several places (the most sustained discussion dealing with The Salt Lake Tribune’s indignation at black troops being stationed in Salt Lake), Mormons never appear – or at least, aren’t identified as Mormon.  This book would still be valuable for anyone doing Mormon Studies, as Utah is part of the frontier and I found myself making connections between church history and what Adams discussed.  On the other hand, this means there is still an opening for an ambitious scholar to take what Adams has done and apply it specifically to Mormon history.

2 thoughts on “Book Review: Class and Race in the Frontier Army.”