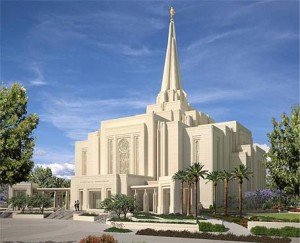 Every so often the public gets a chance to enter a Mormon Temple to get a peek at what goes on inside. These rare opportunities present themselves before the religious dedication of newly built buildings or on occasion renovations. In some ways these are equal parts public relations and celebrations. Local Arizona news for channel ABC 15 had a report that claims a look inside the pre-dedication constructed Gilbert Arizona Latter-day Saint Temple, although it is more a report about the background and people involved. Non-Mormons are not the only ones that have very little information about what takes place once declared a Holy Sanctuary.

The hesitancy to discuss the specific aspects of activities and rituals keeps the members of the LDS Church who haven’t gone from knowing what to expect. First time attendees often describe their initial experience as shocking or disorienting. This despite the fact that there really isn’t anything untoward that is said or happens. In fact, many who have repeatedly attended say it becomes rather boring. A few claim to have fallen asleep, with some evidence to back that up. The newness of it all strikes almost everyone as disjointed from typical chapel worship. Some don’t recover and never return.

Blame for this is often placed on a lack of preparation. There is some truth to this. Because of the sacred nature of the Temple activities, only vague references can be divulged. There is a certain feeling among Mormons that the whole topic is off limits. Such a position goes too far, considering how much information exists in a study of General Conference talks on the subject of the Temple. How much can those who would be going for the first time be prepared? That is not an easy question to answer.

The first thing to get out of the way is the idea that the LDS Church doesn’t have the proper material for use in preparation. As mentioned already, even if there isn’t enough officially collected manuals, there is over 100 years of General Conference and LDS Church publications to create a personalized set of instructions. Taking the lead of the celebrated Hugh Nibley who wrote extensively on the subject; if the leadership talked about something then so can the general membership. Be careful with this, because how they talk about the Temple topics is as important as what they say. Naturally, they set the example.

Students, if they attend any kind of Temple “prep” class, are given the aptly titled manual Preparing to Enter the Holy Temple as a study guide. It is a general overview consisting of platitudes, quotes, and simple introduction. Alone it does very little as guidance. The teacher’s guide Endowed from on High is more substantial. A suggestion could be to give the students a copy of this instead of the other, or perhaps both since this one references the shorter text. It breaks down into seven topics that are fundamental to any knowledge base. The lessons contain more specific LDS leadership quotes and a wide variety of scriptural references that make great starting points for contemplation. These manuals should be great beginning, and not ending, points to discussion.

Perhaps the lack of proper preparation doesn’t exist because of what the LDS Church provides, but those who teach. They themselves are not always sure how far to go in the presentations. Again, this has to do with a certain amount of cultural assumptions about the degree of “secrecy” involved with the Temple. An attitude of sacred respect is laudable, but sometimes turns into over protection. Following the promptings of the Holy Ghost to open the curtains just a tiny bit might be necessary. That means if you are going to teach a class or seminar to prospective Temple first timers, become spiritually and educationally prepared yourself.

Of course, Temple preparation can only go so far. No amount of lessons and instruction can replace the actual experience. That is as it should be. To a degree the Temple is supposed to shake us loose from our comfort zones. It is a Holy House of the Lord set apart from the world and therefore everyday lives. What makes it harder than needful at times is the modern culture. Religion that used to be filled with meaningful ritual and milestones has abandoned the forms. The Catholic Church still retains aspects of active ceremony, Jews haven’t had a Temple for millennia, and Protestants despise all but baptism, communion, and marriage that aren’t considered necessary. Even the semi-secular Masons that used to be respected enough to include U.S. Presidents starting with George Washington became during Joseph Smith’s day despised. Today they are ignored save for evangelical Christians who continue to fear the organizations.

The most important preparation is getting ready for making the Covenants. What is promised by and to attendees should already be in the hearts of the members. Those who haven’t gone should become familiar with the 10 commandments, the Law of Consecration at least in theory, and the Mormon religious beliefs about family based morality. Those who cannot agree with abiding or intentions of improving on following the moral teachings of the LDS Church will be more than shocked by mere ritual. If past stories of those offended enough never to attend again are to be believed, the biggest problem is making promises with no intention of fulfilling them. Getting past that makes it easier to try again.

Going for the first time can be scary because of unfamiliarity, but it can also be rewarding. Perhaps only those who have gone will be reading this, but just in case be advised to let yourself be surprised. Take it in like you would the first day of college. Pick out as much and as little as you can understand and leave the rest for later. For those who pay attention, new nuggets of truth and inspiration are found with each Temple visit. Don’t be afraid to ask questions while in the Temple at appropriate times and lean on those outside who you trust. Most importantly, go again.