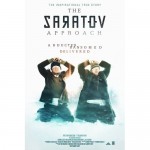 Arguably the most successful Mormon made and oriented movie, The Saratov Approach is like no other missionary themed movie made to date. There are the usual tropes and scenes found in other movies, Like God’s Army and The Best Two Years, but the mold is often broken. Audiences and critics alike have come away having positive reviews. It can now be bought and watched at home.

It goes almost without saying that the movie is based on a true story about two missionaries kidnapped in Russia. The abductors had hoped a large and wealthy American church would pay a $300,000 ransom for their safe return. Things ended up very differently than expected for everyone involved. That is all the story synopsis that needs told. It might be part of history what happened, but that outcome will be passed over to avoid unnecessary spoilers.

One of the obvious questions that Mormons almost always ask is if the movie is safe to watch with the family. Despite the PG-13 rating for subject matter and bouts of violence, there is probably not much to be concerned with viewing. The rating system, that has been argued over since its start, dropped the ball yet again. It seems more like a “hard” PG rating that two decades ago would have been slapped on to any similar film. Why anyone bothers paying attention to what the rating board decides (for someone who thinks such a system is still important) is questionable, but that can be a discussion for another day. With individual discretion there is no reason the whole family can’t sit down and enjoy this cinematic production.

Like all movies, the first exposure the audience gets is film trailers. They can be both revealing and misleading. The ones for The Saratov Approach are no different. Like the trailer showcases, it is more theatrical and made with better production values than most Mormon movies. Marketing it as a thriller is no mistake with the many mini-heart pounding moments. However, a spiritual tour-de force this is not, except in the abstract. First and foremost this is the story of an abduction of two young men by those with evil intentions.

Depending on how you fall on the side of Mormon film making, the focus on the abduction over spiritual experiences can be a plus or a minus. Here are two people living an “idyllic” life of prayer and preaching forced into a life threatening situation. Instead of trying to save souls, they now are faced with trying to save themselves if possible. Faith and the Gospel become the best hope for endurance even if death is expected. One of the missionaries ends up struggling with that existential probability with fear.

Corban Allred plays the missionary Elder Tuttle in a role that is at times frustrating to watch. Actors can only present the characters written for them to perform. He came across as a scared, negative, and ill tempered individual during most of the ordeal. It would be interesting to know if the real Elder Tuttle would agree with the portrayal. Corban did his sympathetic best and ranged from overdone comical to brilliantly frightened. His partner Elder Propst played by Mclain Nelson was the opposite; calm, thoughtful, and the obvious leader. The contrasts were important to keep the character’s separate identities, but it would have been better to mix the reactions more to round both of them out.

There is no denying that Alex Veadov as the villainous Sergei is a convincing threat. This isn’t the first time he has played a “baddie” such as in the equally mid-level independant Act of Valor where he was a more crafty bad guy. He looks and acts something like John Glover’s Smallville Lionel Luthor, only without that trace of feigned heart. Right when the movie is about to turn into a King Lamoni moment with Elder Propst starting the first discussion, Sergei becomes part Korihor who attacks faith. Little twists like this help bring the movie above average. The viewer isn’t always able to guess the direction it takes. Nothing demonstrates this better than the Character Nikolai played by Nikita Bogolyubov who is constantly and wonderfully changing emotional directions. He is probably the best character of the group struggling to maintain humanity doing a wicked act he believes necessary.

The abduction and sports scenes stand out because of the emotional impact they create for the whole movie. It is obvious once the Elders open the apartment door what will happen, but there is still a huge shock when it does. The tension building up is released by a spasm of violence partly obscured by the backs of the hostage takers. It is made worse by the noise and confusing camera cuts that both hide and reveal the beatings. The following makeup doesn’t match what should have been the injuries, but that is understandable since the imagination can fill in the incongruity. Later there is a wonderful lighter moment about Utah Jazz and Chicago Bulls that once again demonstrates how vulnerable Nikolai can be and lets the audience breath. All three of them are barely out of the teenage years in a very adult world. Probably what makes the movie work so well is the focus on humanity without too much relying on sentimentality for cheap manipulation.

The weakest moments of the movie are back in the United States. It seems most of the scenes come across as phony in performances and writing. Its tragic for sure, but robust discussions, emotional trauma, political actions, and struggles are hinted at instead of faced head on. Doing the home front justice would most likely extend the film too long, but seemed needed. The question kept presenting itself, who are these people? Names were given, but still they ended up forgettable parents and government officials. Even the former missionary who called to tell his abduction story came and went like a phantom begging to be fleshed out. Despite this, the home front was necessary and didn’t distract from the whole.

To end, there was (probably) an unintended theme about the power of the media to shape events and influence perceptions. The whole idea of the abduction, apparently, came from reading a magazine discussing the corporate angle of the church. Later the abductors try to keep what they did out of the news, but it becomes an international story. Interesting enough, the media reports used were obscure and took some of the reality out of the movie. Probably too expensive to get CNN or even KSL clips. Then again, maybe there was a deliberate use of less prestigious newscasts. Why the real events ended the way they did can only be guessed, but the movie hints media pressure made the situation volatile. They had two choices; let the missionaries go or kill them.

7 thoughts on “A Review of “The Saratov Approach””